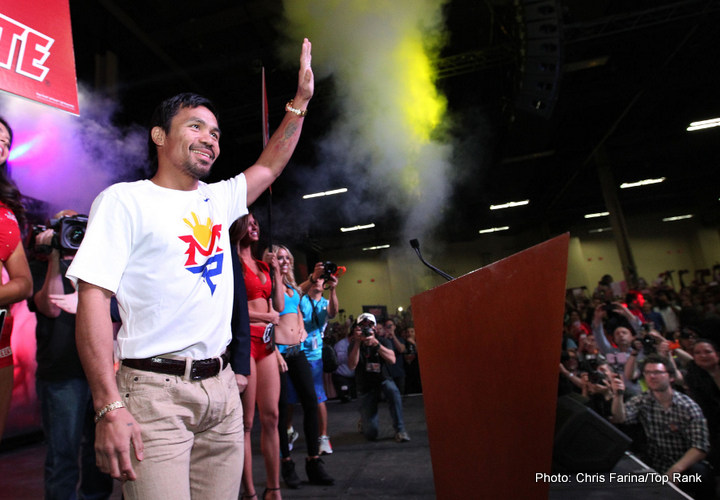 By TFF: The most anticipated fight in boxing history will be taking place this Saturday night on May 2nd between Floyd Mayweather Jr. and Manny Pacquiao in their pay-per-view bout at the MGM Grand in Las Vegas, Nevada. So who’s going to win?

I suppose my opinion is irreverent at this point with just a few more days till we finally get the answer. Many people make valid cases as to why one would dominate the other. In the end we may end up with a closer fight than we thought, or a complete mismatch which I hope is not the case.

Here are my thoughts: I think that Mayweather Jr. always finds a way to fight his fight. He is a defensive master, he is quick, he likes to throw pot shots and he steals rounds after rounds by doing what he does best. I’m convinced that Floyd even keeps a tally of punches thrown and landed by his opponent and he always manages to pull off close rounds by doing just a little bit more by round’s end. Again, Mayweather is a defensive master fighter and that’s what he does and that’s what makes him successful.

Pacquiao on the other hand is a Tasmanian devil. He’ll go in there throw nonstop punches and fight to the end, and there is rarely any idle moments in the rounds he’s fought. Pacquiao has been more defensive lately in his fights, but for the most part he is an extremely fast twitch reflex puncher. His punches launch and land on the target faster than any fighter I’ve seen. Juan Manuel Marquez was able to neutralize Pacquiao in their four fights together, but in reality it’s the type of fight that Pacquiao has chosen to use against Marquez that has made him look his equal.

The minute Pacquiao put Marquez down 3 times in the 1st round of their first fight in 2003, then he got stuck on the idea that he could take him out at any minute if he just pressed on. Marquez adjusted because he is also a very good counter puncher. But if Pacquiao would have used his speed and footwork from the very beginning against Marquez with the same conviction that Mayweather sticks to his defensive skills from start to finish, then the Marquez fights would have been easy for him.

The question is who has the will to make the other fighter fight their fight this Saturday? Neither can break the other’s will. Floyd fights a defensive fight and Manny will come forward throwing 100 punches per round, and that’s how they’ll fight on May 2nd, which is why I give it to Pacquiao. Floyd would have to change too much about what’s made him so successful in the ring all these years for him to have a chance of winning the fight. He would have to triple his output and connect enough punches to steal rounds.

Pacquiao has the speed, strong shoulders trained for the endurance necessary to throw 100+ punches per round, footwork that is unmatched in the sport and most importantly superior stamina to even Floyd There is no doubt in my mind that Pacquiao has the stamina to go 20 rounds without a problem. I’ve been a boxing fan since the early 70s and I’ve seen many boxers and very few boxers have shown little or no signs of fatigue by the end of a fight like Pacquiao.

I believe that extreme stamina is the glue that binds all of Pacquiao’s other skills and will be key in his victory. Now on a separate note; why would FMayweather Jr. say ‘no’ to a rematch with Pacquiao in September? Honestly, I give him little chance in beating Pacquiao, and he will no doubt grant Mayweather a rematch during their post-fight interviews. If the Mayweather-Pacquiao fight is reasonably close then why wouldn’t Floyd try again in a rematch while making a ton of money? Floyd will, however, have to keep in mind that he will now be for the first time in many years on the B-side of negotiations the second time around in the rematch.

Let’s hope we get to see a competitive fight this Saturday, and I honestly hope I’m wrong. May 2nd will answer who’s the better fighter between them both. If Pacquiao beats Mayweather, and I think he will, does that make him a better fighter than Floyd as a whole? No, in fact, here’s an example: If I were a king and fought my wars with boxers in the ring, I would probably use Floyd to defeat a wider range of fighters than Pacquiao