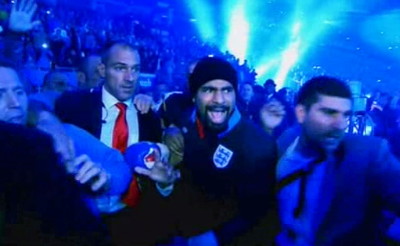 By Scott Gilfoid: 34-year-old former two division world champion David Haye (26-2, 24 KOs) has reportedly been arrested in Dubai at an airport and is being accused of fraud, according to the Mirror.co.uk. The soon to be 35-year-old Haye is said to have allegedly passed a bad check on the amount of £341,000.

If this is true, it’s unclear why a check from Haye would bounce because he made a lot of money from his last two fights against Dereck Chisora and Wladimir Klitschko in 2011 and 2012.

Haye hasn’t fought in the last three years due to a combination of injuries and him just taking time off.

Haye’s passport was taken from him and he’s been in Dubai for two weeks now.
“The cheque was presented to the bank four days before I landed,” Haye said via the mirror.co.uk. “It was not due to be presented until final completion of my property, which is due in a few weeks. This was an administrative error that was rectified. I explained to the police. And presented documents as proof.”

Haye has since been released from custody from the Bur Dubai police station.

As for Haye’s boxing career, he’s still talking about eventually getting back in the ring one of these days. He’s been out of action for ages after suffering three injuries that halted fights against Manuel Charr, and Tyson Fury [twice]. Haye’s latest injury was to his right shoulder, making it necessary for him to have surgery. Haye has been slowly rehabbing his shoulder and he supposed to be ready to return to the ring.

The big question is why is Haye in the vacation spot like Dubai rather than in the gym working hard to restart his stalled boxing career? Haye has talked about wanting to get a title shot against WBC heavyweight champion Deontay Wilder in the near future, but that’s not going to happen with him still not fighting. If Haye truly wants a title shot against Deontay, he needs to not be in the gym training to return to the ring. As it is, he’s probably going to have a hard time getting back to where he once was. We’re talking three years of inactivity.

George Foreman took 10 years off from boxing and came back to win a world title. Vitali Klitschko was out of boxing for four years and he came back and won a world title in 2008. But the difference between those guys and Haye is that they were big heavyweights. Haye is a tiny heavyweight, weighing in the neighborhood of 210 pounds. He depends on speed rather than size. He might not be the same fighter once he returns to the ring.

Arum: To compare Mayweather to Ali or Sugar Ray Robinson is a joke »