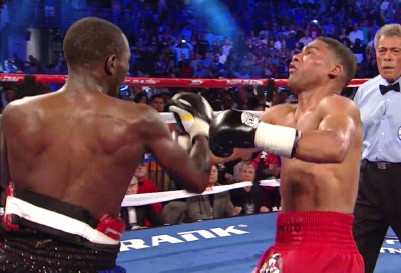 Crawford should be waiting in line for a title shot at 140, because he’s never fought at this weight. The WBO is simply letting Crawford get a shot at the vacant WBO light welterweight title just based on him being the WBO lightweight title holder.

“Terence Crawford had a fantastic year in 2014 and captured the world’s attention with Fighter of the Year accolades. To continue the momentum, Crawford will look to capture another world title against Thomas Dulorme on April 18,” said Top Rank president Todd duBoef on his twitter.

Dulorme isn’t a great choice to be fighting for a world title at 140, because he’s coming off of a controversial 12 round split decision win over Hank Lundy last December in a fight that a lot of boxing fans thought Dulorme lost.

Dulorme also looked terrible in his fight against Karim Mayfield last year in March 2014. Dulorme won the fight by a 10 round decision with scores that were far too lopsided for how close the fight was.

Crawford is a counter puncher with a style that is appreciated by hardcore boxing fans who like to see stylistic fights. Crawford doesn’t tend to slug with his opponents, and some of his fights have been ugly to watch, such as his recent 12 round decision win over Raymundo Beltran last November.

Crawford clinched constantly to shutdown Beltran’s offense. While it was effective, it was very boring to watch unless you like to see fighters clinch all night long to stall out a fight. It was the sweet science, but it was terribly boring to watch. One would hope that Crawford changes his fighting style now that he’s moving to the light welterweight division, because it’s not going to be pretty to see him holding a lot in his fights.

Crawford has recent wins over Beltran, Yuriorkis Gamboa and Ricky Burns. The Gamboa-Crawford fight was an exciting one, but that was largely due to Gamboa forcing Crawford to slug with him. That was one of the rare fights where Crawford had an entertaining fight. With his size advantage over Gamboa, who really is little more than a pumped up featherweight, Crawford was able to score a 9th round stoppage to get the victory. However, in Crawford’s next fight against Beltran, he made it boring by holding him all night long.

The winner of the Matthysse-Provodnikov fight will have to wait their turn to get a shot at the WBO light welterweight title. If Crawford defeats Dulorme, then we’ll likely see him defend the title against former WBO champion Chris Algieri in his first title defense. After that, it’s possible that Crawford could face the Matthysse vs. Provodnikov winner. But it’s also possible that Crawford may take a voluntary defense against a fringe level opponent before looking to defend his WBO title against the Matthysse-Provodnikov winner in 2016.

« Pacquiao will tear Mayweather apart on May 2nd