Ricky Burns vs. Omar Figueroa in Hidalgo, Texas on May 9th 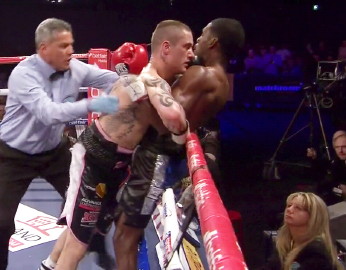 By Scott Gilfoid: The May 9th fight between former WBC lightweight champion Omar Figueroa (24-0-1, 18 KOs) and former two division world champion Ricky Burns (37-4-1, 11 KOs) will be taking place at the State Farm Arena, in Hidalgo, Texas, USA. No titles will be on the line for the fight. Figueroa is now the WBC lightweight Champion in Recess.

It was already known that the fight would take place in Houston, but the actual venue was still undecided until today. This is really a do-or-die fight for Burns, as he’s lost two out of his last three fights in the last two years. Burns will be turning 32 on April 13th, and he’s obviously not getting any younger.

The fact that he was beaten by fringe contender Dejan Zlaticanin last year in June wasn’t a good sign for Burns. He lost the fight by a 12 round split decision, but it was a clear loss. Forget the split decision garbage, Burns lost and he deserved to lose by a unanimous decision.

In 2013, Burns dodged a loss to Raymundo Beltran when he was given a 12 round draw in a fight that he appeared to lose 11 rounds to 1. It was a lucky break for Burns, but it still didn’t save him from taking a licking in his next fight against Terence Crawford in March of 2014. What wasn’t expected was Burns losing his next fight after the Crawford fight against Zlaticanin.

Figueroa looked horrible in his last fight against Daniel Estrada in August of last year. To Figueroa’s credit, he was able to summon up one last push to score a stoppage in the 9th round after he was badly cut above his left eye.

The cut was so bad that it’s kept Figueroa out of the ring for months. By the time he does fight on May 9th, Figueroa will have been out of the ring for nine whole months. That obviously is a good piece of time, but it may have saved him from taking a loss to Jorge Linares or another fighter.

During his times as the WBO lightweight champion, Figueroa looked vulnerable as heck. Each time he fought he had problems. He won all of his fights, but he took a lot of shots and didn’t look like a strong champion.

If the Burns-Figueroa fight had taken place three to four years ago, Burns would likely have done really well against him, but right now it’s hard to say. Burns has looked like a shot fighter ever since his fight against Jose Gonzalez in May 2013. I’m not sure if it’s a case of Burns taking too many head shots in that fight, or maybe him suddenly aging overnight, or a case of him facing better guys than he’d been fighting his entire career.

It’s one of those things. Whatever it is, you can’t know what you’re going to get with Burns in this fight. My guess is Burns will lose to Figueroa, and look really bad in doing so.

I expect Burns to taste the canvas once or twice in the fight, and wind up getting cut up. This isn’t a fight that Burns will be able to clinch his way out of. He’s going to need to slug with Figueroa if he wants to win, because he won’t be able to hold him enough to keep him off of him.