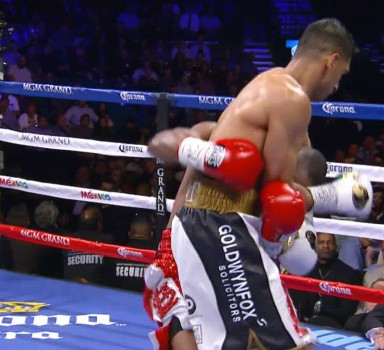 By Scott Gilfoid: Amir Khan has even less ammunition to get a fight against Floyd Mayweather Jr now that Nielson has released his ratings for his fight last Saturday night against Devon Alexander on Showtime.

According to Dan Rafael the Khan-Alexander fight averaged 762,000 viewers with a peak of 887,000. These obviously aren’t good numbers, and they’re definitely not the kind of numbers that Khan can brag about in saying that the boxing public in the U.S can’t get enough of him.

With those kinds of numbers, it looks like the boxing public blew town last Saturday or else they were too busy watching the dueling telecast on HBO between Timothy Bradley and Diego Chaves.

Bradley vs. Chaves brought in healthier numbers with 966,000 viewers with a peak of 1.087 million. Those aren’t bad numbers considering that Bradley was fighting a little known guy in Chaves.

What the Khan-Alexander viewer numbers tell you is that Khan still isn’t a big enough attraction to bring in decent numbers on Showtime. Perhaps one reason for this is the long time frame from the last good opponent that Khan fought.

Before his fight against Alexander, Khan really hadn’t fought a decent fighter since his knockout loss to Danny Garcia in 2012. After that fight, Golden Boy Promotions backed Khan off from facing top tier guys and put him in with Carlos Molina, Julio Diaz and Luis Collazo. Putting him in with the light hitting Alexander was yet another safe fight for Khan.

In order to build Khan’s popularity, he needs to be matched against the biggest punchers and the biggest threats to beating him in the welterweight division. That doesn’t mean putting him in with a light puncher who was recently beaten badly by Shawn Porter. It means that Khan needs to fight guys like Keith Thurman, Kell Brook, Marcos Maidana, Porter, and Luis Abregu.

Putting Khan in with fighters with zero power like Alexander, Molina and Collazo isn’t going to help make him popular. It’s just going to keep him as he is right now. In other words, Khan will remain a guy that will likely get to the next level in the United States in terms of becoming a box office attraction and a huge star. I see Khan being similar to Brandon Rios in terms of popularity, but not even that popular. Rios brings in decent rating when he fights despite his limited talent.