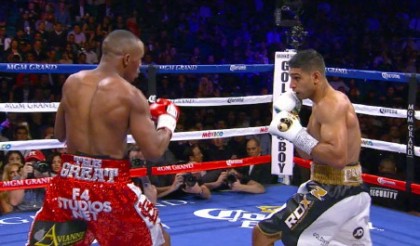 By Jay McIntyre: Amir Khan (30-3, 19 KO’s) has all the athletic aptitude to go very far in professional boxing. His hand speed is sharp, his accuracy with those flashy combinations is quite crisp and he has been involved in some very entertaining fights. He has fought some of the established names and won, and he has lost to two established fighters as well (and then there’s Breidis Prescott…).

It’s often been said that it’s always easier to learn from failures than to learn from victories. Sure, I’ll buy that, sometimes. But then there’s Amir Khan. His loss to Danny Garcia was chalked up to a glass jaw by some fans, and knockouts do indeed end most discussion on the matter. To be honest, I’m not sure it was his chin that was the problem in that fight. Let’s also consider his loss to Lamont Peterson. That loss was argued by his supporters to be a simple matter of frustrating reffing and a tough call by the judges who awarded a majority decision to Peterson. I think there’s more to it than that as well. There are few fighters that can rely on a very spare skill set and still manage reach those boxing summits (after all, how many body punches has Muhammad Ali ever thrown?). and Khan has often enough been able to do without certain nuances in his style because of his speed, accuracy and work rate.

Upon close inspection, what you will realize is that Amir Khan is an awkward blend of both decisiveness and susceptibility all at once.

Amir Khan is not an often discussed body puncher but his tendency to do so certainly merits our attention. This isn’t because he does it a lot, or because he hits particularly hard to the body, but it is a subtle contributor to his success. More targets means more things that need defending, and with his fast hands flashing out, body punches create even more problems for a boxer to anticipate.

In addition to this, Khan often uses the jab to control much of the fight and to set up his other punches. He keeps his opponent busy by being busier and one step ahead. The jab doesn’t have to land for Khan, though he can be quite accurate with it. When coupled with his speed, his jab keeps his opponent busy and let’s him land a higher volume of punches. Since this observation relies more on an overall appreciation for his fights, rather than certain key sequences, Compubox will be relied upon to help demonstrate this overall impression.

In looking at the Compubox statistics from six of his fights, it will become clear that the numbers don’t lie. Six of his more notable fights were evaluated – including his two losses to Lamont Peterson and Danny Garcia. If you click on each name, I have included a link to the full Compubox punch stats for further reading. I found them immensely valuable.

Anything Malignaggi could do, Khan did better. Khan’s speed troubled Malignaggi, who could not really find success leading or playing the role of counter-puncher. Khan also had little to fear from Malignaggi’s “powder puff” punching. It was a clear decision.

Maidana, true to form, plodded straight for Khan the entire fight, winging bombs and leaning heavily on his front foot. It would sound like an easy style to pick apart, but his relentlessness and power made it an interesting fight (Maidana has since improved incredibly since this loss). Khan’s jab, body punches, and counters at long range were essential to his unanimous decision win here.

Judah was a big name for Khan because he had fought big names during his long career. But Judah was always incapable of turning in those big performances against top opposition. Judah had frustrated Mayweather for six convincing rounds, but that Judah was nowhere to be seen as Khan out-boxed and ultimately put away the experienced veteran in five rounds.

Whenever the fight was at range Khan was able to stay largely in command. Khan’s jab and hand speed let him land and look the better of the two. Peterson’s long pesky jab was an issue, but he wasn’t able to put many power punches behind it against Khan. It was on the inside where Khan’s dearth of in-fighting ability wrought havoc against him as Peterson piled on power punches and consequently stole rounds as well.

Although Garcia was ultimately able to outpunch Khan, this was made possible by a fight-changing left hook in the third round. Prior to that, Khan was winning rounds and making a very strong case for himself (why he lost that fight will be discussed later on in this article).

Alexander really had no answers for Khan and he was comprehensively outclassed in this fight. Khan’s hand speed and combinations were certainly a problem for Alexander, but Alexander didn’t do much on his own behalf to try and change the momentum of the fight.

Compubox is by no means the be all, end all of criteria when reflecting on a boxer’s fights, nor does the higher jab output necessarily guarantee success (look at the majority loss to Peterson). That being said, I am a firm believer in always asking: what does the data tell me? Sometimes it has a way of adding to our perspective if looked at objectively.

What can be gleaned from watching Khan fight is that he often outworks his opponents, controls the fight with his jab and when he does punch, he does so in bunches. His speed is a major asset in contributing to his work rate and accuracy because his opponents struggle to react in time.

I don’t think I’ve heard a ringside commentator speak about Amir Khan without making reference to his hand speed. Of course his punches are fast.

In looking at his fight against Devon Alexander we were able to see that his hand speed is greatest ally. Even though he has moved up in weight from 140 lbs. to 147 lbs. he still looked fast against an opponent that is pretty quick as well.

Time and again throughout the fight Khan was able to either land first, or set up his combinations with his jab and some very convincing feints. It was a very clear win for Khan, and arguably a shutout performance for him.

In the first couple of minutes Khan had been probing the defenses of Alexander, varying the levels and placements of his punches. The body jab was established often enough to get Alexander to react to it and thereby expose his head. At the 2:00 minute mark of the first round the audience was able to bear witness to the blistering speed of Khan combination punches.
In this two second sequence from 2:00 to 1:58 Amir Khan uses his left as a throwaway hook to divert Alexander’s attention from the right hand which then lands. Remember that Khan had been using the body jab and Alexander responds to Khan’s throwaway hook by jabbing at what would have been the level of Khan’s head had he jabbed low again. After the right hand laded, Khan then landed a left hook with some force as his body has rotated considerably from its placement of the right hand. Following this, the right hand (thrown again) of Amir Khan is blocked by Alexander’s left glove, but again, Khan uses one punch to set up the next. Khan ends his combination by landing a left on Alexander. Four out of six power punches find a home in two seconds – not bad at all.
However, for all the praise that he deserves for this ability to punch with both speed and accuracy, his fight against Devon Alexander is also an opportune time to segue into his deep-rooted faults as a prizefighter.
Prone to Counter-punching
If you saw one round of Khan’s fight against Alexander, you saw them all. If you did that much you probably noticed the poor placement of Khan’s non-punching hand, his exposed chin, and his tendency to get off balance. The more Khan punches, the more he pulls apart his own defense and leaves himself open to counters. This is a serious flaw in Khan’s style that has been around for years. The surest way to beat a fighter with superior speed is to time them with their own shots. Juan Manuel Marquez was able to mitigate (though never consistently control Manny Pacquiao’s speed with his accurate, but slower counters because he timed the Filipino. Alexander wasn’t the guy to expose this weakness, but it’s been there for a while. When underdog Danny Garcia fought Amir Khan in 2012 he found a home for his shuddering hooks by timing Khan and exploiting his flaws as a puncher. When Khan punched once or twice and kept his form and balance, then Garcia struggled to hit back. But when Khan lingered or got reckless, he paid for it.

Editor’s Note: This article has been amended for boxingnews24.com and thus does not contain any of the animated gifs or any photographs which help illustrate the points made. To gain a better understanding, please visit the web address above.