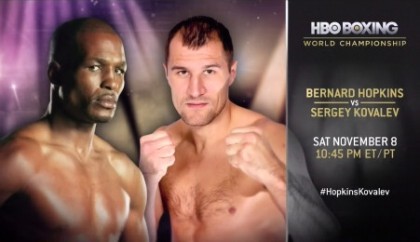 This is perhaps the final chance for the 49-year-old Hopkins to try and unify all the titles in the light heavyweight division, because he’s not young enough to stick around to try and come back from a loss to Kovalev to go after all the titles.

Unless it’s a controversial decision loss for Hopkins, Kovalev will be moving forward to face WBC light heavyweight champion Adonis Stevenson to try and win the last remaining title at 175.

The Hopkins-Kovalev fight is a difficult one to predict with any kind of accuracy, because there’s no way of knowing how either of these guys are going to react when they get inside the ring on Saturday.

Kovalev has been breezing through all of his opponents since he turned pro in 2009, but he’s also never faced anyone in Hopkins’ class before. This is a step up for Kovalev, and he’s going to have to show that he can handle that step up.

As for Hopkins, he may not be any better than he showed in his two fights against Chad Dawson. Hopkins has looked good in his last three fights, but he’s not fought anyone really good in those fights. He’s beaten Karo Murat, Beibut Shumenov and Tavoris Cloud.

Those are pretty average fighters, and it’s not surprising that Hopkins was able to look good against them. It’s one thing looking good against guys like that and another thing entirely to shine against a top caliber light heavyweight like Kovalev. I wouldn’t be surprised if Hopkins were to lose to someone like Dawson if they were to fight again.

It would just show that Hopkins hasn’t gotten better since his loss to Dawson in 2012. The only thing that’s changed is Hopkins has faced weaker opposition since then, and that’s made Hopkins look better than he actually is at this point in his career.

Kovalev won’t be able to out-box Hopkins like Dawson did, so he’s going to need to look to take his head off in every round by throwing a lot of power punches. Hopkins will need to do a lot of holding and moving if he wants to win the fight. He’s probably not going to be able to win rounds by throwing pot shots, because Kovalev won’t be lulled into a slow fighting pace like Cloud and Shumenov were when they fought Hopkins.

« Pacquiao: I have to stop Algieri from running