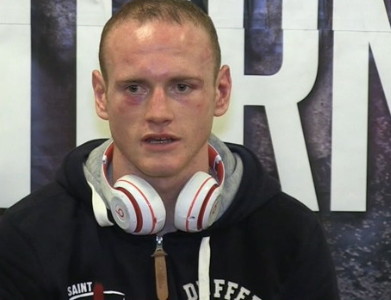 By Scott Gilfoid: George Groves (20-2, 15 KOs), the mandatory challenger for WBC super middleweight champion Anthony Dirrell, will be defending his World Boxing Council Silver 168 pound title next month on Sky Box Office against little known American Denis Douglin (17-3, 10 KOs) in a 12 round bout on the undercard of the Nathan Cleverly vs. Tony Bellew 2 rematch on November 22nd at the Echo Arena in Liverpool, UK.

It’s unclear if an American fighter was selected in hopes of getting the U.S boxing fans more interested in watching the Groves-Douglin fight to build up interest for a Groves vs. Dirrell fight in 2015. If that’s the case, then I think Groves’ promoter Kalle Sauerland picked the wrong guy.

‘’I’m looking forward to getting back in the ring,’’ said Groves. ‘’This is a chance for me to impress on a big card. I plan to steal the show! It’s a calculated risk, lose this fight and I lose my shot at Dirrell. But I want to stay active, I want to box as regularly as possible and I’m confident I can get the job done.”

I doubt that any casual boxing fans in the U.S have ever heard of Douglin before. If they were going to pick an American fighter to draw interest in a Dirrell vs. Groves fight, they could have at least selected someone that is regularly shown on Television in the U.S like J’Leon Love.

Douglin, 26, is a southpaw like Anthony Dirrell, but that’s where the similarities begin and end. He doesn’t have Dirrell’s blazing hand speed, excellent boxing skills or his tremendous punching power. The only thing he has in common is he’s a southpaw and he lives in the United States. It would be interesting to know if Sauerland was under the impression that Douglin is a household name in the U.S when he chose to pick him for Groves.

Douglin was knocked out two years ago in the 5th round by the talented Jermell Charlo.

Last year, Douglin was beaten by a fighter named Jose Angel Rodriguez by a lopsided 8 round unanimous decision. Douglin also was stopped in the 3rd round in 2011 by journeyman Doel Carasquillo (14-17-1). He never avenged any of those losses. Since his defeat at the hands of Rodriguez, Douglin has won his last three fights against little known opposition in beating Julius Kennedy, Orlando Membreno and Charles Whittaker.

The DeGale-Periban and Smith-Sjekloca fights are decent ones, but I see the other fights as pure mismatches. I like the main event between Bellew and Cleverly, but the fight card is a mixed bag. It’s got three decent but hardly great fights, and four mismatches.

You can make a strong argument that the Bellew-Cleverly 2 fight card shouldn’t be pay-per-view. I mean, neither of these guys have world titles, and they likely never will capture a world title in the cruiserweight division. Groves is fighting a 2nd tier guy in Doublin in what appears to be a horrible mismatch. Callum Smith is fighting a guy that was recently beaten twice. McDonnell has a mismatch against Ramos, and Quigg is fighting a fighter who has never fought a 12 round bout and who has never fought outside of Japan.

« Saunders in tough against Eubank Jr