Danny Garcia: Put up, or shut up 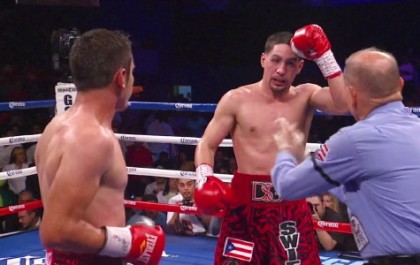 By Victor Candelario The Puerto Rican Philadelphia native slugger Danny “Swift” Garcia (29-0-0, 17 KOs)  has a possible showdown with Manny Pacquiao (56-5-2, 38 KOs) looming after Pacquiao’s camp expressed interest in meeting Garcia in the near future after Pacquiao’s showdown with Chris Algieri. But after Garcia’s last 2 outings in the ring it has become clear as day, Danny Garcia needs to step up.

Garcia faced 9th ranked light welterweight in the world Mauricio Herrera (21-4-0, 7 KOs) in a twelve rounder in Puerto Rico and was given a gift from the heavens because it was clear to everyone watching, Garcia was frustrated, Garcia was always a step behind, and Garcia had been exposed.

It didn’t stop the corrupt judges watching the fight to give Garcia the nod by decision. I believe Garcia his self knew he lost(though ofcourse he’d never admit he did), and instead of coming back in a big way against top tier opposition he faced Rod Salka (19-4, 3 KOs) a pillow puncher who couldn’t hurt a fly if you loaded his gloves with plaster.

Now I have nothing against Garcia my problem is how do you go from beating Amir Khan, Zab Judah, and Lucas Matthysse to Herrera (who got robbed) and Rod Salka (who isn’t even ranked in the top 70 light welterweights in the world and has no business being in the ring with Garcia.

Who you should be fighting Mister Garcia is the likes of Marcos Maidana, Shawn Porter, Kell Brook, Keith “One Time” Thurman, and even Timothy “Desert Storm” Bradley, if of course you decide on making the official move up to a stacked welterweight division with plenty of competition. If you decide to continue fighting at light welterweight (like recently) you shouldn’t be in the ring with Salka when you have better options like Adrien “The Problem” Broner and Lamont Peterson. Garcia and his father talk a big game but if you look at his resume he beat a washed up Erik Morales (Twice), a shot Zab Judah, Amir Khan (his chin might as well be Glass) , Lucas Matthysse (the only fighter on his resume that truly counts), and Herrera (Who beat him and got robbed.)

While I think Danny Garcia can successfully clear out the light welterweight division by defeating both Lamont Peterson, and Adrien Broner (Not nearly as good as people make him seem) the true tests remain at welterweight. A fight with Marcos Maidana could go either way but would for sure be an all out war that would truly be worthy for a fight of the year contention. As for Keith Thurman he is currently one of the most feared and avoided fighters in the sport with ridiculous knockout power, and if you ask me, Garcia wants no part of Thurman, but that too would be a great fight for boxing.

After being exposed by Herrera it should be clear to all boxing fans, they are playing it safe. Herrera didn’t just get robbed, he laid the blueprint out for all fighters in the division to be able to beat Garcia. I see no reason Danny Garcia (The Number 1 ranked light welterweight in the world) is in the ring with Rod Salka (Not even in the top 70). The fans don’t deserve that, boxing doesn’t deserve that, the legendary fighters who would fight anybody that was put in front of them doesn’t deserve that. So I say this Angel Garcia, Danny Garcia, we hear you, the boxing world hears you, but trash talk can only get you so far, and so far all we hear is 2 guys talking a big game and showing us why actions speak louder then words. Let me be the first to say you have a long way to go before you can even step into the ring with a Floyd Mayweather past his prime (I could imagine how bad a prime Floyd would destroy you) or even Manny Pacquiao just past his prime. There are fights to be made Danny Garcia, have your team make it happen, its time for you to put up, or shut up.

« Provodnikov wants rematch against Algieri in 2015

Three fights I’d like to see other than Mayweather/Pacquiao Pt. 1 »