Provodnikov wants rematch against Algieri in 2015 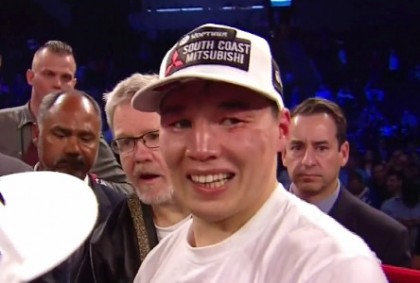 Algieri has a fight coming up next month against WBO welterweight champion Manny Pacquiao in a catch-weight fight at 144 pounds on November 22nd in Macao, China. If Algieri loses that fight, which is highly likely, then Algieri will drop back down to 140 and be available to face Provodnikov in a rematch.

Obviously, that’s not the big fight that Algieri is looking for, because he’s been talking about wanting to face the likes of Floyd Mayweather Jr after the Pacquiao fight. But Algieri won’t be in a position to be asking for a fight against Mayweather if he loses to Pacquiao.

It would be a situation where the biggest fight available to Algieri would likely be a rematch against Provodnikov unless Top Rank promoter Bob Arum decided to have Pacquiao and Algieri fight each other again. The only way that happens is if their fight is close and controversial, which we’ve seen on a number of occasions over the years in Pacquiao’s fights.

Provodnikov will be fighting in Russian before the end of the year against an opponent still to be determined. He wanted to fight Tim Bradley in a rematch, but either Bradley or Arum wasn’t keen on that fight taking place.

It was likely concluded that Provodnikov was too dangerous for Bradley to fight a second time, because Arum will likely try and build Bradley up again so that he can continue to put him in with Pacquiao in the future for additional rematches. They’ve already fought each other twice, but it’s clearly going to go beyond that number if Arum does his job by rebuilding Bradley’s stock.

« Beltran sees the Crawford fight as a champion vs. Champion match

Danny Garcia: Put up, or shut up »