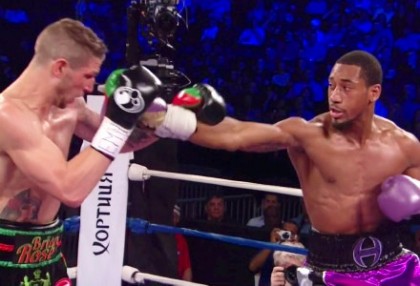 By Scott Gilfoid: Well, it looks like #2 WBO Billy Joe Saunders (20-0, 11 KOs) is out of luck as far as him fighting for the vacant WBO middleweight crown. The World Boxing Organization committee has ordered a fight between Demetrius Andrade and #1 WBO Matt Korobov (24-0, 14 KOs) for the vacant WBO 160 pound title rather than letting Saunders get a shot at the crown.

Andrade applied this past week to be the WBO to be mandatory for the vacant WBO middleweight title, and the WBO granted his request.

“WBO Championship Committee orders Andrade vs. Korobov for the vacant Middleweight Championship of the World. Link to Resolution to follow.BJ Saunders fought Jarod Fletcher on 9/14/2012. Saunders has not fight a classified opponent in the last year. He hasn’t faced ranked opposition in 14 months. Existing precedent. Champions moving up in division have been previously given consideration to vie for title.” the WBO said via their twitter account today.

You can understand why they would pick Andrade, the WBO junior middleweight title holder, over Saunders from Britain, because Andrade is a proven commodity due to him holding the WBO 154 pound title. They know what they’re going to get with Andrade – an exciting fight filled with lots of action, blazing fast punches and lots of big shots.

In contrast, Saunders is more of a runner that tries to avoid action rather than initiating it. He’s someone that would likely have circled the ring all night long, trying to avoid getting hit by Korobov’s big shots while attempting to steal rounds with his jabs an occasional shots.

Korobov is going to have a tough time with a talent like Andrade, because he’s got good size at 6’1”, and excellent punching power. Both guys have strong amateur backgrounds with both of them competing in the 2008 Olympics. Andrade lost a controversial decision to Kim Jung-Joo by a 9-11 score in a fight that many boxing fans thought that Andrade won. For his part, Korobov was beaten by Bakhtiyar Artayev in the 2008 Olympics.

Andrade is coming off of an impressive 7th round stoppage win over Brian Rose from last June. Korobov defeated Jose Uzcategui last June in a WBO middleweight title eliminator bout.
Korobov was previously poised to fight Peter Quillin in a fight that was supposed to take place on November 1st, but Quillin decided to vacate his WBO title rather than face the dangerous Korobov.

The positive thing about Andrade fighting for the vacant WBO middleweight title against Korobov is that if Andrade beats Korobov, we could see Andrade taking on the likes of WBA middleweight champion Gennady Golovkin, because Andrade is pretty fearless. He’s not afraid to face the best guys in the division. Had Saunders won the WBO title, I’m not too sure he’d be interested in doing anything more than facing his mandatory challengers when ordered and taking a lot of voluntary defenses against obscure opposition. I’m not sure that Andrade will have any luck getting the likes of WBC champion Miguel Cotto or WBA champion Daniel Jacobs to fight him because I can see both of those guys choosing to go in an opposite direction rather than facing a dangerous guy like Andrade.

Korobov has the technical skills and the power to beat Andrade, but I’m not so certain whether he had the engine to beat him. Andrade’s stamina is a lot better than Korobov’s and that might be enough for him to get a win over the Russian fighter.

All Access: Mayweather vs. Maidana episode 3 tonight on Showtime »