All Access: Mayweather vs. Maidana episode 3 tonight on Showtime 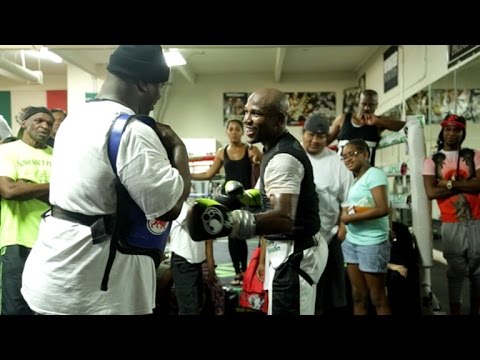 By Chris Williams: Tonight, All Access: Mayweather vs. Maidana 2, episode 3 will air at 7:30 PM ET/PT on Showtime. This episode will show Mayweather and Maidana getting to the final stages of preparation for this Saturday’s “Mayhem” card from the MGM Grand in Las Vegas, Nevada. The fight is televised on Showtime pay-per-view.

With just 3 days to go before the big fight, Mayweather wants to show boxing fans that age is just a number. “It only took me a year to become champion. That’s all. Just one year, but that was in the 90s though. I’m an old man. I’ve been doing this for like 20 years. Come on number 47. Number 47,” Mayweather said.

At today’s final press conference, Mayweather said “I’m in terrific shape. I had a great training camp. I’m still learning. I’m still growing. Of course, I can’t grow no longer physically, but I’m growing mentally. But I’m ready to fight, what can I say? If you go back to the previous stats [for the first fight with Maidana], I think he threw 800 to 900 punches, and I had less punches than he did. I think I threw half as many punches as he did.”

Maidana threw twice as many shots as Mayweather, but because of his accuracy being so poor, Maidana ended up landing less shots than Mayweather. That’s a credit to Mayweather for picking off so many of Maidana’s shots, because he made Maidana miss those punches by blocking and ducking them.

“So my defense is tight and we’re going to have a great game plan. We’ll just see how the fight plays out come Saturday. We really don’t know what the future holds for Floyd Mayweather. Actually, I was just getting word that video was out there. I didn’t know because I’m training for a fight. If I offended anyone, I apologize. I didn’t mean to offend anyone. And I apologize to the NFL and to anyone else that got offended. I’m not perfect. I make mistakes and I don’t condone that at all.”