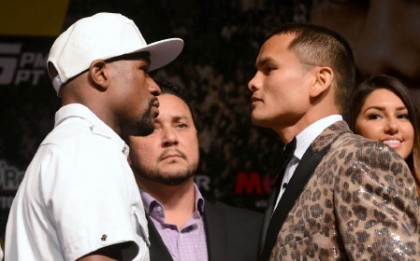 “I am ready to make history,” Maidana said today at the final press conference at the MGM Grand in Las Vegas, Nevada. “I am very well prepared. I know him already. It’s going to be a big advantage for me,” Maidana said. “I’m going to pace myself this time. I’m not going to waste punches. Nobody has never knocked me out before. I hope he takes advantage of it and tries to knock me out because I know I will. I’m ready for anything. I’m ready to go 12 rounds. I’m ready to stop him if I land the right punch.”

The face off lacked drama unfortunately. Maidana turned his head after briefly locking eyes on Mayweather. I’m not sure what happened, but it looked like Maidana wanted no part of the face off today.

Mayweather said “Did he deserve the rematch? Absolutely. The fans deserved the fight. We’re going to have a great game plan. I know for me to be 46-0, I’ve got to be doing something right. As of right now, that’s how I’m feeling [about retiring next year]. That’s how I’ve been feeling lately. It’s all about blood, sweat and tears and that’s what the fans will see Saturday night. I’m a true champion and a true champion never backs down.”

Maidana is expected to be considerably lighter for the Mayweather Jr fight on Saturday. The weight loss was triggered by Maidana running out of steam in the 2nd half of his previous fight against Mayweather.

The thought is that if Maidana comes in lighter for the fight, he’ll have a better chance of fighting longer at a higher level. Whether that’ll be the case or not remains to be seen. We could very well see a weaker Maidana for the rematch with his stamina being just as bad, if not worse, than it was last time. When you lose muscle weight like Maidana appears to have done, it doesn’t help the stamina and of course it doesn’t help in the power departement.

“We thought we’d need to be big to deal with Floyd’s punches but Chino (Maidana) said the power wasn’t there,” Maidana’s trainer Robert Garcia said via USAtoday.com. “He got tired late in the fight. Now we want him to be strong late in the fight. We’re not going in there to counterpunch.”

« Broner’s trainer doesn’t want him to fight Matthysse next