Rebrasse sees Groves as speed bump in his path 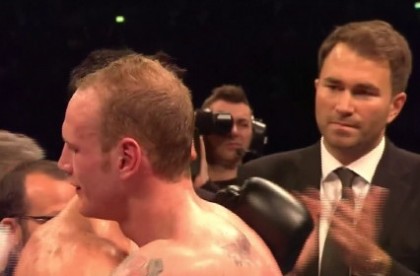 By Scott Gilfoid: #3 WBC Christopher Rebrasse (22-2-3, 6 KOs) is on a quest to try and lock himself in as the WBC 168 pound mandatory challenger to WBC champion Anthony Dirrell, and the only one that stands in his path from accomplishing that goal is the recently twice knocked out George Groves (19-2, 15 KOs).

Rebrasse, 28, believes completely that he’s going to deal Groves yet another loss on his record when the two face each other in 10 days on September 20th in their WBC super middleweight title eliminator bout at Wembley Arena in London, UK.

Rebrasse wants that title shot against the talented Dirrell, and the only way he can get that fight is to go through the 26-year-old Groves to get it. Rebrasse is extremely fortunate that he doesn’t have to fight #1 WBC Julio Cesar Chavez Jr or #2 WBC Gilberto Ramirez to become the WBC mandatory, because those two talented fighters would give him a mess of problems with their power, size and boxing skills. At least with Rebrasse fighting Groves, he’s got someone with stamina and a chin problem that he can exploit when he get him inside the ring.

Rebrasse will be traveling from his native France to fight Groves in the UK on 9/20, but he’s not worried about fighting in front of a crowd of pro-Groves fans because he’s not bothered by crowds. His thing is to do his business in the ring and let the crowd sit helplessly while he deals Groves another loss.

‘’A ring is a ring wherever you are and the rules remain the same,’’ said Rebrasse. ’I’m not worried about fighting in London in front of George’s fans. I will not be rattled. I have fought away from home before and I have won away from home, it will be no different on September 20.’’

The only thing to worry about in fighting in Groves’ environment is that if it goes to the cards, it might be a little for Rebrasse to get a decision if the fight is close. Fighting at home might work against Groves because with the fans cheering every shot he throws, it could lead to him being more courageous than usual and getting too close to Rebrasse and catching one of his big shots. Rebrasse isn’t a big puncher, but he can generate power when he sits down on his shots. We could see him score a knockout at some point in this fight if Groves gets too ambitious and forgets himself.

Rebrasse is coming off of a 4th round stoppage win over Mouhamed Ali Ndiaye last March to win the vacant European super middleweight title in what has to be seen as an upset win.

‘’I took the traditional route,’’ said Rebrasse. ‘’First I became French Champion, then EU Champion and now that I’m European Champion the next step for me is to win a world title. That is my dream, that is my only objective and I will do everything I can to achieve it. I won’t let anything or anyone stand in my way, including George Groves.’’

Tickets for the Groves-Rebrasse WBC super middleweight eliminator bout can be purchased st axs.com or by phoning 08448 24 48 24.

« Demetrius Andrade would be too much for Canelo Alvarez, says Paul A.

Maidana: The rematch benefits me more than Mayweather »