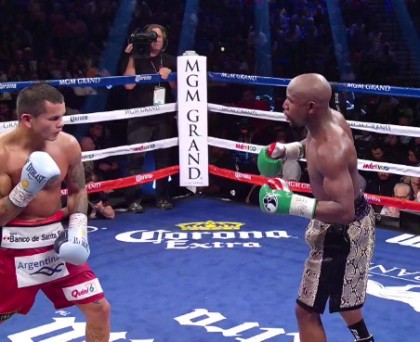 By Jermill Pennington: This past Saturday we seen the pound for pound king Floyd Mayweather Jr. (47-0 26ko) in action once again against the tough Argentinian Marcos “El Chino” Miadana. In this fight Floyd promised we would see the marvel of old, but in all honesty I didn’t see the old marvel, I seen the marvel finally getting old.

Being a huge fan of Mayweather’s after his fights I always left with a sense of amazement. Seeing a man compete in a combat sport all the while making it look easy was something I had grown accustom to seeing out of Mayweather. Though one could argue that Mayweather did indeed dominate the fight, it did not look easy for whatever that’s worth. I have come to realize that I pay to see Mayweather look super human, untouchable. While others pay to see him be beaten to prove he is not super human, in essence we are looking for the same thing.

This past Saturday Mayweather won the fight pretty convincingly, however there was something left unfulfilled. For me personally this was a first having this feeling. He didn’t seem to be nearly as sharp and accurate with his punching though the compubox stats my not support my opinion. The footwork he used didn’t seem as effortless and fluid. For the first time I seen Mayweather resort to tactics that would lend themselves not to a world class athlete, but to a crafty old vet. Contrary to popular belief I have never seen Mayweather run in a fight. I have also never seen Mayweather holding in a fight as part of the game plan until this past Saturday. It was clear that Mayweather wasn’t going to let Miadana work on the inside. Some may credit Kenny Bayless for having a lot to do with that however I side more with Paulie Malinaggi’s comments of how little effort Miadana was putting in to working out of the holds. I was a fan far before the Money Mayweather persona came to be, I grew up with Pretty Boy Floyd and for the first time in a long time the fight was far from pretty.

But then there’s something almost nostalgic and brilliant about Mayweather at this point of his career. We are seeing the natural progression of a truly great fighter. Before you embody the notion of Mayweather’s reign seemingly coming to an end ask yourself “how many fighters are there that could go 24 rounds with Miadana and really never take a solid punch”. Mayweather systematically unarmed Marcos Miadana in this fight with early body work and staying off the ropes. I came to the conclusion that they could fight 100 times and Mayweather would win every time. What were likely going to see out of Mayweather from this point on will no longer be the marvel, but the magician.

For most fighters once they lose that thing that made them elite whether it be power or speed most times their careers come to an end shortly after. One could argue that the last time Oscar DeLa Hoya was seen in his prime form was versus Fernando Vargas. Oscar then went on to have eight more fights going 4-4 in them, more importantly in that eight fight span likely securing the revenues to fund his promotional company. In the twilight of a great fighters career is at times when you get to see the best from that fighter. Sometimes so far ahead of their class at the start of their careers they seem invincible. Mohammed Ali after three years out of the ring was able to come back and fight then champion Joe Frazier for the heavy weight title, many argue the three years loss for Ali was his prime. Ali was still able to fight years after being out of his prime on sheer grit, smarts and savvy. Earlier in Ali’s career one couldn’t imagine him lying on the ropes as he did versus George Foreman doing what is now known as the “ropa dope”. With the athleticism all but gone, Ali was still able to find a way to come up with the victory.

For Mayweather I anticipate the same, similar to Bernard Hopkins being able to sustain his career as long as he pleases on savvy alone. Still able to beat a strong contender in Marcos Miadana with relative ease though clearly on the backside of his career. With proverbial “S” gone from the chest of Mayweather contenders see that now is the time to strike, could the best be yet to come? Only time will tell. For Mayweather the fight against father time has been looming for some time. Both undefeated, however for this fight it will be the fight time my money goes against Mayweather. I don’t see him losing his “0” to anyone else.