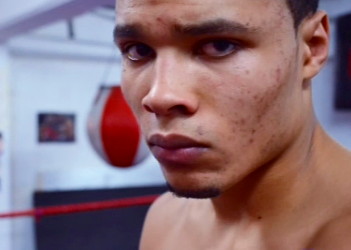 The Saunders-Eubank Jr was officially added today. Saunders, 25, had been hoping to get a shot at the vacant WBO middleweight title that was recently vacated by Peter Quillin. But the World Boxing Organization chose instead to have Demetrius Andrade face #1 WBO Matt Korobov for the vacant WBO 160 pound title based on the better quality opposition that Andrade has been facing compared to Saunders, who hadn’t fought a decent quality opponent for 14 months.

“Saunders has done everything asked of him so far winning British, Commonwealth, WBO Intercontinental, and European titles and as he’s shown, the better the opponent the better he performs,” said promoter Frank Warren via Skysports.com. “This will certainly be the case against the young Eubank Jnr and he’ll take his game to another level.”

This is a step up for Eubank Jr, who has been facing largely fodder opposition since he turned pro in 2011. Both guys are about the same age, but Saunders has face a little bit better opposition thus far. Eubank Jr has wins over Ivan Jukic, Stepan Horvath and Robert Swierzbinski in his last three fights. He’s scheduled to fight Jez Wilson next month on October 25th at the Echo Arena. It’s unclear whether Eubank Jr will still take that fight, because it’s kind of risky to be fighting that close to a bigger fight like the Saunders match-up.

Neither Saunders nor Eubank Jr are what you can call a puncher. They both slap a lot and move a great deal. It’s hard to pick a winner out in a fight like this because neither of these guys has the kind of power to set themselves apart from the other.

« Khan: Kell Brook will always be there; I want Mayweather!