Broner’s trainer doesn’t want him to fight Matthysse next 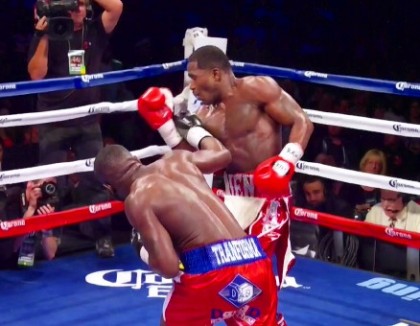 By Dan Ambrose: Mike Stafford, the trainer for former three time world champion Adrien Broner (29-1, 22 KOs), says he prefers that Broner not fight #1 WBO, #2 WBC Lucas Matthysse (36-3, 34 KOs) next. Stafford wants Broner to fight for a world title and pick up a belt before fighting Matthysse at a later date.

If Stafford gets his way then we might not see Broner vs. Matthysse for quite some time. In that case then there would have been no real point in last Saturday’s mismatches between Broner and Emmanuel Taylor and Matthysse vs. Roberto Ortiz on Showtime.

It was thought by many boxing fans that the main reason why Broner and Matthysse were on the same card was to setup a big fight between them later this year. But now it appears that they were simply setup in mismatches without them fighting each other this year.

It’s still possible Matthysse and Broner’s adviser Al Haymon will put together a fight between them this year, but I have a feeling that’s not going to be the case.

Broner called out Matthysse after the Taylor fight last Saturday night, and Matthysse also said that he was interested in facing Broner if he can’t get Danny Garcia in the ring for a rematch. There’s no way Garcia will volunteer to fight Matthysse again.

“I would rather wait for a title shot before fighting Matthysse,” said Stafford to RingTV.com. “Plus, Matthysse is with Al, so we’ve got plenty of time. Matthysse ain’t going nowhere, you know what I’m saying?”

Stafford probably doesn’t have anything to worry about as far as Broner fighting Matthysse goes, because the chances of Haymon putting them in with each other are likely less than zero.

Haymon is probably never going to make a fight between Matthysse and Broner, because if he does then we’ll likely see the more marketable Broner suffer an even worse loss than he did in losing to Marcos Maidana last year.

Broner showed pretty clearly in the Taylor fight, with the way he had to struggle to beat Taylor, that he’s not in the same class Matthysse. A good fight for Broner would be against Roberto Ortiz, the fighter that Matthysse destroyed in 2 rounds last Saturday.

« Paul Smith vs. Arthur Abraham: Does the Cream always come to the top?