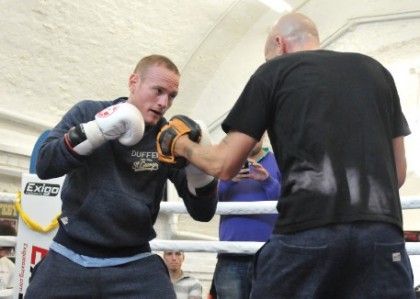 (Photo Credit: Philip Sharkey) By Scott Gilfoid: #4 WBC George Groves (19-2, 15 KOs) says he sees WBC super middleweight champion Anthony Dirrell as more beatable fighter than Sakio Bika, and he thinks it’s a good thing that he could be potentially facing him in the near future if he can defeat little known #3 WBC Christopher Rebrasse (22-2-3, 6 KOs) in their fight this Saturday night, September 20th at the Wembley Arena in London, UK.

The World Boxing Council made the Groves-Rebrasse fight as a final WBC 168 pound eliminator bout despite the fact that Groves has lost his last two fights by knockout to IBF/WBA super middleweight champion Carl Froch. That’s what Dirrell took issue with, the WBC letting Groves fight in an eliminator bout off of two defeats in a row.

Dirrell thinks that Groves should have had to fight his way back to a title shot rather than be rewarded for his two knockout losses by given the chance to fight immediately in an eliminator. In an interview with IFL TV, Dirrell said that he wouldn’t fight Groves because he wouldn’t have earned the shot, even if he beats Rebrasse, who Dirrell says is a “bum”.

“I’m back in the picture for a world title shot provided that this weekend,” Groves said to Buncey’s Boxing Podcast. “So it’s out before Christmas. Ideally, I’d like to start the New Years as the WBC champion.”

I’m not sure that Groves is going to be able to fight Dirrell by December unless the WBC comes forward and orders the fight against Dirrell to be made by then, which I highly doubt. But then again, if the WBC was willing to let Groves fight in their WBC super middleweight eliminator off of back to back knockout losses, then anything is possible. I wouldn’t even be surprised if Dirrell winds up traveling to the UK to fight Groves instead of the fight taking place in the United States. Dirrell said to IFL TV that there’s no way he’s going to fight in the UK after what happened to his brother Andre Dirrell in his loss to Carl Froch in 2009.

“The fact that it’s Dirrell instead of [Sakio] Bika is actually quite nice, because I think he’s a much more easily beatable,” Groves said to IFL TV. “He’s a very animated individual. Right now, I’m justly in line to fight him. We have a letter from the WBC saying the winner of the ‘Return of the Saint,’ the European title fight because myself and Christopher Rebrasse will be a final eliminator for the WBC title and the winner will become the mandatory. So unless he knows something I don’t, unless he has a conflicting letter, unless he’s just talking out of his backside, I’ll certainly be in line for the shot in the very near future provided I win on Saturday night.”

Groves shouldn’t assume anything about Dirrell, because he’s clearly the tougher fight for him than Bika. The shots that Dirrell was nailing Bika with for 12 rounds, I can’t see Groves being able to take more one or two of them without collapsing on the canvas. Dirrell was still throwing hard even in the 12th round against Bika. Dirrell’s hand speed, power and stamina would give Groves huge, huge problems. Groves might have some success in the first 3 rounds, but once Dirrell catches him with a big shot, I expects Groves to be on his back for the 10 count, wondering what hit him.

I question the logic of Groves trying to get back into the thick of things so quickly after being knocked out by Froch for the second time last May. I think Groves is making a big mistake because his chin might not be intact after those two knockout losses. The last thing Groves needs is a hard punching fighter like Dirrell to be nailing him with big power shots for 12 rounds.

Mayweather Sr: More than likely it won’t be Pacquiao who faces Floyd Jr next »