Groves: Once I beat Rebrasse, I’m coming for Dirrell 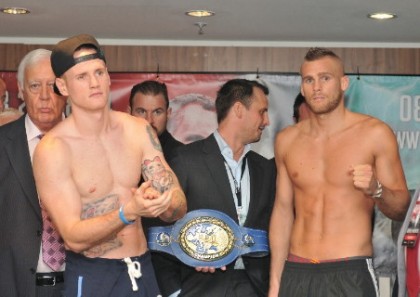 (Photo credit: Philip Sharkey) By Scott Gilfoid: Having been knocked out twice in a row in his last two fights has done nothing to diminish George Groves’ self-belief apparently, because he feels that he’s going to not only beat EBU super middleweight champion Christopher Rebrasse (22-2-3, 6 KOs) tonight in their WBC 168 pound title eliminator, but he’s then going to go on and beat the talented WBC super middleweight champion Anthony Dirrell (27-0, 22 KOs) to take his strap from him.

Groves thinks that Dirrell’s disgust at the potential of him having to defend his title against a fighter with two recent knockouts is a sign that Dirrell is afraid of him rather than him believing that the World Boxing Council has cheapened their own title by lowering the standards for which a fighter can fight for their belt.

Groves will have home town advantage tonight against Rebrasse despite the fact that he’s the challenger for his EBU strap. The Groves-Rebrasse fight will be staged at the Wembley Arena in London, UK.

“Dirrell has been doing a lot of talking. He has said that he won’t fight me, that I don’t deserve a shot, but I think that just proves he’s scared,” Groves said via ESPN.com. “We’ve had a letter from the WBC confirming a mandatory shot if I win this fight. Once I’m done with Rebrasse, I’m coming for him.”

I think Groves means that Dirrell will be coming for him, since Groves and his promoter Kalle Sauerland have designs of dragging Dirrell over to the UK to have him fight over there rather than the more traditional method of the challenger always fighting in the champion’s home turf.

You can bet that the Dirrell-Groves fight negotiations will go to purse bids at which point Sauerland Events, the promoters for Groves, will be in a good position to win the bid unless some outside promoter wants to jump in and put a big bid on the fight. I kind of doubt that any other promoter will look to win the Dirrell vs. Groves purse bid because a fight between Dirrell and Groves is only a big deal in the UK.

I get the feeling that Sauerland and Groves are both getting way, way ahead of themselves in assuming that they’re going to get past Rebrasse tonight. If you look at the poor opposition that Groves had fought going into his two fights against Carl Froch, he really hadn’t fought anyone that you can call a good fighter.

Sure, Groves beat Glen Johnson, but the guy was like 43-years-old and way, way, way past his prime. I don’t count as a real victory. To me, that was more of an exhibition fight given how old Johnson was.

As for Groves’ biggest win of his career against James DeGale, I had Groves losing that fight by a narrow decision. He faded big time from the 5th round on with DeGale completely taking over the fight. However, the crowd was firmly in Groves’ favor in that fight, cheering his every miss and saying nothing each time DeGale would land a hard shot.

I listened to the fight without the sound of several times and each time I saw it, I had DeGale winning. But I noticed that when I watched it with the volume turned up, it seemed like Groves did a better job than he actually did. He looked like a tired fighter after the 5th round, and there’s no way I could give him any of the last 7 rounds of the fight.