George Groves – Looking to bounce back 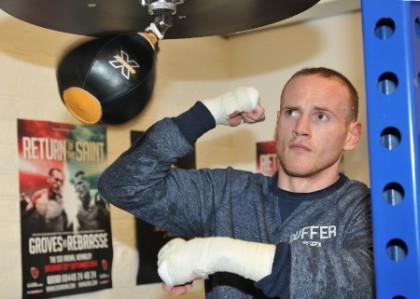 (Photo Credit: Philip Sharkey) By Daniel Hughes: George Groves (19-2, 15 KOs) faces Christopher Rebrasse (22-2-3, 6 KOs) on Saturday night at Wembley Arena, in London, England for the European super-middleweight title and the chance of again putting himself back in line for challenging for world honours. It is certainly a must win fight for Groves and a fight he will want to certainly look good in coming off back to back world title defeats to Carl Froch.

It has been a little over three months since Groves was ko’d against Froch at Wembley Stadium in front of 80,000 fans and a worldwide TV audience the fight against Rebrasse at Wembley Arena is a stone’s throw away from his last outing. The opponent Frenchman, Rebrasse for me ideal in that he has not been stopped. He’s durable but does not carry enough power to trouble Groves. It is a fight I expect Groves to work his way into the fight early then send out a statement by stoppage victory. George Groves has heavy hands and I sense he will be looking to take out his opponent in style Saturday night. Listening to him talk in the build up to this fight he is certainly looking to bounce back in style.

Groves has his critics, but an ideal boxing career to me is all about engineering yourself into a position to make opportunities for yourself, make some decent money achieve some career goals and get out. George Groves it seems divides opinion here in the UK but he is a fighter that knows how to maximize opportunities that arise on all those levels. The defeats against Froch certainly bruised his ego slightly, but not his bank balance. Both fights providing excellent entertainment. Boxing at its best to be fair to both men, where the hype outside the ring was certainly backed up in it.

So the Saint returns Saturday night under new promoters in Sauerland. It really should be a good move for both sides, the Germans experienced in rebuilding careers and certainly back their fighters in giving them the stage and platform to showcase their talent. The opportunities are still there for Groves to win a world title. Time is still on his side at 26 years old. He has had only 21 professional fights but has gained more big time experience good and bad, than many fighters with many more fights under their belts. He certainly has decided to be a fighter that has looked to take competitive fights from very early in his career. The overseas fans would probably not of seen him in action winning and stopping Charles Adamu, tough and respected Scottish fighter Kenny Anderson and also against arch rival James DeGale in a close split decision victory.

WBO World title challenger Paul Smith was dispatched in two rounds, Noe Gonzalez stopped in five and the veteran tough guy Glen Johnson on points. I enjoy watching George Groves simply because I honestly can’t remember him in a boring fight win or lose, the fans love him or hate him certainly get their money’s worth, Groves also.

« Floyd found a way to win