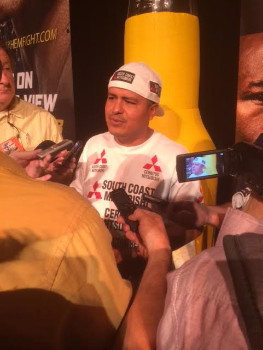 By Raj Parmar: An interesting tidbit of information came out today regarding the never ending glove dispute saga between Floyd Mayweather Jr (46-0, 26 KO’s) and Marcos Maidana (35-4, 31 KO’s). There had been some confusion in the boxing world regarding whether Maidana would fight Mayweather in 8 ounce Everlast Powerlock gloves (which he fought Floyd with in May) or a bigger 10 ounce version of the gloves.

After the final Mayweather-Maidana press conference was over today, Maidana’s trainer Robert Garcia spoke with reporters about the gloves issue and revealed that Marcos almost had to wear 10 ounce Everlast Powerlock gloves in the rematch with Floyd. After going through some general paperwork regarding the fight recently, Garcia discovered that the paperwork indicated 10 ounce gloves were to be used by each fighter in the fight. This came as a complete shock to Garcia and he immediately did something about it.

It definitely makes one wonder how the change in glove size was put into the documents without Garcia or anyone from Team Maidana agreeing to it beforehand. It could have been simply an oversight or could have stemmed from the existing confusion over glove choices and amidst the chaos was placed in there without full understanding from everyone.

Whatever the case was, Garcia definitely looked like he was ready to take things to extreme measures in order to ensure the 10 ounce gloves were not going to be used. Therefore although the situation looks finally settled, everyone involved in organizing the event will likely be tense right up until after the weigh-in when both camps get to look at each other’s gloves again. One thing is sure however, Maidana will not be fighting in 10 ounce gloves and under no circumstance will Garcia allow it to happen.

* Follow Raj_Parmar_11 for quick updates on the happenings in Las Vegas for fight week and fight night; and detailed live notes from the All Access Episode 3 premiere event, weigh-in and fight night will be posted on boxingnews24.com.

« All Access: Mayweather vs. Maidana episode 3 tonight on Showtime

Mayweather: I need a knockout and I’m going for it »