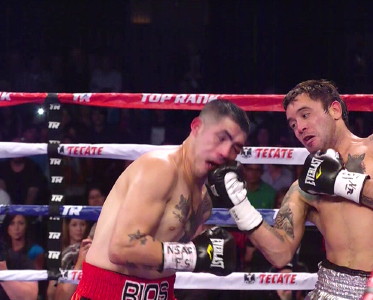 By Dan Ambrose: Brandon Rios (32-2-1, 23 KOs) was taken to a nearby Las Vegas hospital last Saturday night for an MRI following his 9th round disqualification win over Diego Chaves (23-2, 19 KOs) after reportedly complaining of dizziness, headache and eye problems, according to Dan Rafael of ESPN. Rios was unable to attend the post-fight press conference because he was taken to the hospital.

The MRI results were clear. Rios, who prides himself on his ability to take punishment, took a lot of really hard punches to the head in the fight from Chaves. It’s kind of a good thing that the fight wasn’t a 12 round fight, and that referee Vic Drakulich stepped in to stop the fight because Rios could have was getting hit harder than he’d ever been hit before in any of his fights.

Before this fight, Rios had been in with the likes of Mike Alvarado and Manny Pacquiao, but neither of those guys were nailing Rios with the kinds of shots that Chaves did last Saturday night. This is the one fight where Rios should have been focusing on his defense because him eating Chaves’ punches all night long couldn’t have been a good thing for his health.

Drakulich is meeting with the Nevada State Athletic Commission today to talk about why he chose to disqualify Chaves in the 9th round. It’s likely that Drakulich will be asked about his decision to take a point away from Chaves in the 3rd round of the fight.

Chaves had clinched only a handful of times at that point in the fight, and it was far from excessive. He wasn’t at the stage that we see some fighters where they’re clinching over 10 times per rounds. Chaves clinched 2 times in the 1st round, 3 times in the 2nd round, and 9 times in the 3rd. It wasn’t at the level where you would think that a referee would quickly take a point off.

Rios is going to need to work on his defense in the future. His promoter Bob Arum is interested in matching him back up with Mike Alvarado or possibly matching him against Ruslan Provodnikov or Tim Bradley. With the amount of punishment that Rios took in this fight, it might be better for Arum to match Rios against the light hitting Bradley than having him fight Provodnikov or Alvarado right now.