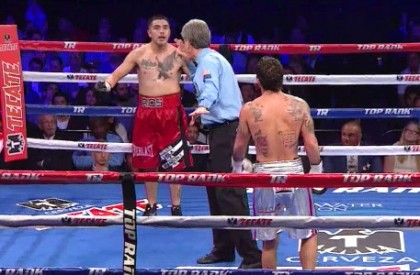 By Dan Ambrose: Trainer Robert Garcia says that his fighter Brandon Rios (32-2-1, 23 KOs) contacted him from the hospital to tell him that he wants a rematch against the hard hitting Argentinian Diego Chaves (23-2, 19 KOs) because he’s not happy with the result of his 9th round disqualification win over him from last Saturday night at the Cosmopolitan of Las Vegas, Nevada.

Rios was training in the 9th round when referee Vic Drakulich disqualified Chaves for reportedly throwing an elbow. I still haven’t seen when and where the elbow was thrown, but that was a reason for the stoppage.

You can understand Rios’ situation in wanting a rematch with Chaves. After all, it’s a fight that many boxing fans felt that Chaves would have won had the referee not disqualified him. If you strip away the disqualification and the two point deductions of Chaves, you’ve got Rios 3 points down in the 9th round with little time to pull out the win.

“Brandon wants it [rematch with Chavez],” said Garcia to esnewsreporting.com. “Brandon tells me, ‘[expletive], I want to fight that mother-[expletive] again.’ He [Rios] wants to give him a rematch. I’d love to do this fight again too, because a lot of people weren’t happy,” Garcia said.

Chaves lost the fight but he won the event, and came out of it smelling like a rose compared to Rios. Chaves’s fighting style was appealing to a lot of fans, apart from the clinching, and he’s reportedly signing a contract with Top Rank. For his part, Rios’ stock plummeted from this fight in a major way.

The fight is being seen as a loss for Rios in the eyes of many boxing fans due to him getting out-boxed, and using his head during the clinches to ram Chaves. Rios’ situation is pretty much identical to where he was at when he was given a controversial 12 round decision win over Richard Abril in 2012 in a fight that many boxing fans saw him losing.

Rios is going to need to impress upon his promoters at Top Rank that he can’t walk away from this fight because it was too controversial. It’s like Rios walking away from another loss. In this case, he would greatly help his career if he were to face Chaves a second time.

It would also save Rios from likely future defeats to Tim Bradley, Mike Alvarado and Ruslan Provodnikov for the time being. Those are the guys that Rios’ promoter Bob Arum is picking from for his next fight. I can’t see any of them that Rios is capable of beating at this point in his career. At least if he were to face Chaves a second time, it would buy him some time before he has to face one of them and likely get battered.