Burns: Eddie Hearn will push for Figueroa fight for me once I get passed Zlaticanin 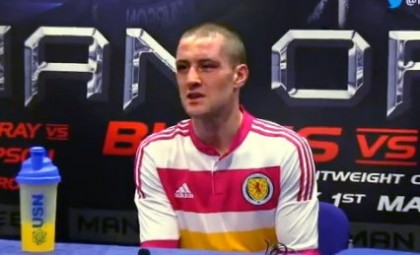 By Scott Gilfoid: #15 WBC Ricky Burns (36-3-1, 11 KO’s) says his promoter Eddie Hearn of Matchroom Sport is going to try and work out a title shot for him against WBC lightweight champion Omar Figueroa if Burns can get passed his Friday, June 27th opponent #13 WBC Dejan Zlaticanin at the Braehead Arena, Glasgow, Scotland, United Kingdom.

Burns, who increasingly has looked like a shot fighter in his last three fights, will be fighting the vacant WBC International lightweight title against the 30-year-old Zlaticanin.

The strap isn’t a big deal, but those kinds of belts often lead to the WBC shooting the winner of the fight to the top of the rankings for some odd reason. I can’t really figure it out, because winning a minor strap like this shouldn’t lead to the winner getting pushed in front of more deserving contenders who have been waiting years upon years for a title shots, but that’s likely what we’re going to see shortly after this fight takes place.

“Once I come through this my promoter, Eddie Hearn, will push for a fight with Omar Figueroa, the WBC champion,” Burns said to the Dailyrecord.co.uk. “If that doesn’t happen we’ll go for a final eliminator – so I am two fights at most from a world title shot. I have another world title in me. Figueroa is good, another southpaw, but his last defense was close and some thought he lost it.”

Burns is coming off of a 12 round decision loss to Terence Crawford from last March in Glasgow. Before that, Burns fought to a 12 round draw against Raymundo Beltran last year in September. That was a fight that Burns appeared to lose by an 11 rounds to 1 margin, yet it was scored as a draw. Beltran never got a rematch despite the fact that he clearly deserved one. And now Burns is fighting a little known fringe contender in Zlaticanin for what could give him a title shot. And what of Beltran? Nothing. He just finished beating Arash Usmanee for the vacant WBO NABO lightweight title instead of getting a title shot that he probably deserves.

Figueroa is a very beatable champion, and if Burns gets a shot against him, he’ll likely beat him and once again have a lightweight world title in his possession. Burns would be passing over the likes of #2 WBC Jorge Linares, Daniel Estrada, Takahiro Aoh, and Hank Lundy if he gets a title shot against Figueroa straightaway off of a win over Zlaticanin on Friday night.