Mikkel Kessler to return to ring in October or November, wants Froch 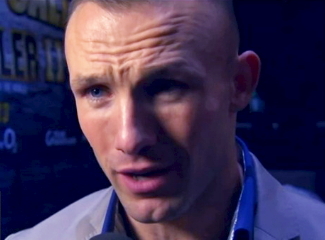 By Scott Gilfoid: After sitting idle for an entire year since his uninspired, listless performance in losing to Carl Froch last year in May, former WBA/WBC super middleweight champion Mikkel Kessler (46-3, 35 KO’s) announced today in a press conference in Denmark that he’ll be returning to the ring in October or November this year, and he’ll be looking for an important fight straightway without a tune-up.

Kessler says he’d like a third fight against Froch, although I’m not sure how that would be possible given Kessler’s time off, lack of fights during the last year, and his less than motivated looking performance against Froch the last time they fought. If all Kessler wants is a big fight without showing that he still has anything left, it’s going to give some boxing fans the impression that he’s looking to cash out. Kessler needs to be fighting tune-ups and contenders rather than going into title shots that he hardly deserves after sitting for an entire year.

“I still have a desire for boxing. I still love to train, and I believe that I can become a World Champion again,” Kessler said. “Now that I’ve made the decision, it’s all in. I’m ready for all the big names out there. Whether it’s Ward, Golovkin or Groves, I’m ready. A third fight against Froch, why not? I’ll be ready for that too. I’m not rusty, but it’s been a while since I’ve boxed, so a fight in October or November would suit me best. At that point, I’d like to have a big fight.”

Having Kessler fight Andre Ward, which I don’t think he’s serious about, would be a bad, bad idea. Ward easily beat Kessler while he was in his prime in 2009, and if they were to fight now, it would very likely be kid’s play for Ward. It wouldn’t be sporting to beat a rusty fighter who has fought only one world class super middleweight in the past four years.

At this point it would be hard to take seriously a third fight between Kessler and Froch unless Kessler were to fight some guys to show that he has something left. The reality with Kessler’s career is that he’s only fought one top guy in the last four years since 2010 and that fight is Froch.

The other fighters that Kessler has fought are Brian Magree, Allan Green, who knocked Kessler down, and Mehdi Bouadla. Kessler has fought exactly four times in four years. That’ one fight a year. In other words, Kessler has been a part time fighter, but he’s not been fighting the top tier opposition through most of those years. How do you take him seriously as a fighter at this point if he’s not staying busy, and if he’s not fighting the best guys? If we’re to base Kessler on his last fight against Froch where Kessler spent the first six rounds staring at Froch from the outside and not willing to negate Froch’s limp jab, then I don’t see any point in Kessler continuing his career because I didn’t see the fire that was once there. He just looked like a guy who was going through the motions.

David Price vs. Yaroslav Zavorotnyi on June 7th in Germany »