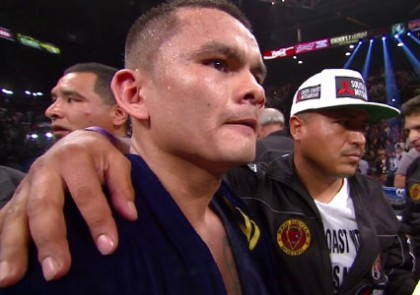 By Allan Fox: Oscar De La Hoya says he’s open to help train Marcos Maidana (35-4, 31 KO’s) for a rematch against Floyd Mayweather Jr. (46-0, 26 KO’s) next September if he needs the help. De La Hoya would work alongside Maidana’s current trainer Robert Garcia and give him pointers in how to beat Mayweather.

De La Hoya lost a close and controversial 12 round split decision in 2007. De La believes that boxing fans will demand a rematch between Mayweather and Maidana due to the competitive nature, and the somewhat controversial decision. In De La Hoya’s mind, you can make a case for the Mayweather-Maidana fight having been more of a draw than a victory for either guy last Saturday night at the MGM Grand in Las Vegas, Nevada.

“I think Maidana gave him [Mayweather] a really good fight that calls for a rematch,” De La Hoya said to esnewsreporting. “The fans are going to demand it. They want it in September; let’s do it. Absolutely. I’ll even train Maidana along with Robert Garcia. I’ll train Maidana every single day. I know a few things. Why is it when Maidana was throwing the jab, he was stopping Mayweather all the time? I can argue left and right that [Jose Luis] Castillo beat him [Mayweather]. I can argue left and right that my fight with him was a close fight. I can argue that it could have gone either way. Some can argue that Maidana should have been a draw.”

It’s difficult to picture De La Hoya driving each day from Los Angeles to Oxnard, California to help train Maidana for a rematch with Mayweather. It’s a little over an hour drive depending on traffic, but the question is would De La Hoya actually do that? He’s obviously joking. What De La Hoya is more interested in is Mayweather committing to that rematch, because it’s a good situation for Golden Boy and for Maidana’s career for Mayweather to fight Maidana a second time.

De La Hoya thinks that if Mayweather had tried to stand in front of Saul “Canelo” Alvarez in their fight last September the way he stood in front of Maidana, the fight would have ended with a completely different result.

« Floyd Mayweather vs. Marcos Maidana Behind The Scenes

Mikkel Kessler to return to ring in October or November, wants Froch »