Manny Pacquiao isn’t the fighter he once was 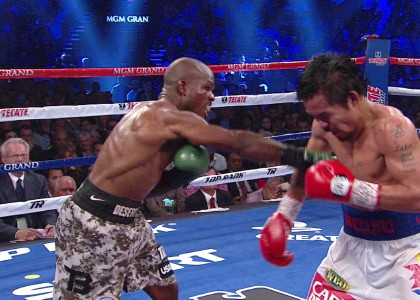 By Bashar Khaddage: After watching Manny Pacquiao vs. Tim Bradley 2 last Saturday night, I’ve come to a conclusion that the once pound for pound king is not the fighter he once was, and he might soon get hurt really bad in the ring. Being a hardcore Pacquiao fan myself, I’ve tried to dismiss the many claims that have circulated around him for 2 years now.

I do believe he outclassed Bradley in the first fight and you’ve got to be blind to believe he lost that fight, but simply put, there is something lacking in his performance.

He no longer possesses the aggressiveness that defined his career, he no longer has the ability to fight for 3 full minutes of every round and he seems very timid to get into an all out exchange. He certainly does not have the TNT power in his fists as he used to. Could it be his KO loss to Marquez that has made him a little more timid? it could be and I wouldn’t be surprised if memories of that still haunt him.

I think what worries me the most are his slowed down reflexes and poor defense. I was shocked to see him getting countered by the feather-fisted Bradley so frequently who managed to buckle Pacquaio’s legs early in the fight. Had that been Keith Thurman, Maidana or Matthysse, Pacman would have kissed the canvas good night. Heck it could have been Mayweather pot shotting him with his lead right hand and Pacman would have been knocked out.

Couple his slowed down reflexes with his poor defense and his diminished punch resistance and you have a recipe for a knockout loss in the making. It also surprises me to see him pull back straight which is a major defensive flaw. You might be thinking that he looked great against Rios, but then again we all know Rios was a tailor made opponent for the fighting congressman.

To Pacquiao’s credit, he did fight like an experienced redefined veteran whilst Bradley looked amateurish and kind of foolish actually with his silly showboating and wild right hand swings which lead him to lose balance all night long.

I do hope I’m wrong because it makes me feel like an amazing era in boxing where the Filipino slugger conquered the boxing world is coming to an end. Win or lose in his next fight, I’ll always remember him as a wild cheetah that destroyed his opponents and was so entertaining to watch.