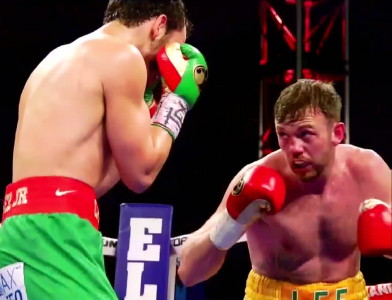 Lee, 29, has basically lost two years of his career following his 7th round stoppage loss to WBC middleweight champion Julio Cesar Chavez Jr. in June of 2012 in Texas.

Instead of bouncing back from that defeat to start fighting contenders again, Lee has gone back to the 3rd tier circuit and had won his last three fights against poor opposition. This Saturday’s fight for Lee will be a continuation of the third tier circuit with him facing a weak opponent that won’t get him ready for what he’ll someday be facing when/if he ever fights for a world title again.

Lee was poised to get a shot at WBA middleweight champion Gennady Golovkin’s strap recently, but the death of Golovkin’s father wiped that fight out. In hindsight, it might have been a good thing because Golovkin is one guy that Lee would have almost zero chance of beating.

I think Lee would have a decent but not great chance of beating IBF middleweight champion Felix Sturm, but that’s the only one of the four champions I could give Lee any chance in beating. WBO champ Peter Quillin would have too much power, as would WBC champion Sergio Martinez.

In his last fight, Lee defeated a fighter named Ferenc Hafner by a 2nd round TKO last November. In his fight before that, Lee defeated Daryl Cunningham by a 1st round knockout last May. In his first fight after his loss to Chavez Jr, Lee had to go life and death with Anthony Fitzgerald. The fact that Lee couldn’t blow through Fitzgerald was really worrisome, and a strong sign that he’s not going to do well when he finally steps it up several levels to face one of the middleweight champions in a year or two.

Pacquiao vs. Bradley 2 battle it out on Saturday »