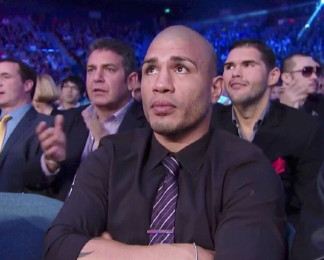 By Dan Ambrose: Trainer Freddie Roach thinks 33-year-old Miguel Cotto (38-4, 31 KO’s) has got the talent to beat Gennady Golovkin, Sergio Martinez and Saul “Canelo” Alvarez before he finishes his career. Right now, though, Roach wants Cotto to face Sergio Martinez next, because he thinks Martinez, 38, is at the very end of his career, and he wants Cotto to be able to pick him off before he gets out of the sport.

Although Roach thinks Golovkin is a good fighter, he doesn’t believe he’s got a big name, and he thinks he’s been protected by his promoters at K2.

“I’d like to get Martinez first because he’s an old man.,” Roach said to Radio Raheem. “Martinez is at the end of his career, and I’d like to get him sooner rather than later…He’s [Golovkin] a good solid fighter, [and] well protected. It’s not the biggest name in the world right now, because he’s being protected and he’s not fighting major fights yet. I think Cotto would put him on the map, and that would be a good fight for us. This guy [Golovkin] is such a big fighter, but I never see him on TV. If he [Cotto] is 100 percent, he can beat all three [Sergio, Canelo and Golovkin] of them.”

Golovkin has fought more than most of the top middleweights in the division in the past year, so it’s difficult to understand how Roach couldn’t have seen him on television. His fights have been televised, but it looks like Roach hasn’t been paying attention because he’s saying he hasn’t been seeing Golovkin on TV. It seems like Roach is using that as an excuse for him not wanting Cotto to fight Golovkin.

At this point I don’t think Cotto can beat any of those three fighters. The red-haired Canelo would out-box him, and knock him out. Golovkin would likely obliterate Cotto in 2-3 rounds tops. I can’t see Cotto getting past the 3rd round against Golovkin, because there’s too much mileage on Cotto. Once he starts getting hit hard, I see the old instinct to take a knee kicking in and Cotto dropping to a knee to get out of harms way. It would be like flashback to the 10th and 11th rounds in Cotto’s first fight against Antonio Margarito. Sergio Martinez is out-box Cotto. I predict that. Sergio will look like a young fighter, as he tears Cotto apart and wins an easy decision or possibly gets a stoppage of a bleeding Cotto.

« Schaefer says Broner vs. Maidana rematch in April on Showtime

Maidana: They want me to give a rematch to Broner; Khan never gave me a rematch »