Maidana: They want me to give a rematch to Broner; Khan never gave me a rematch 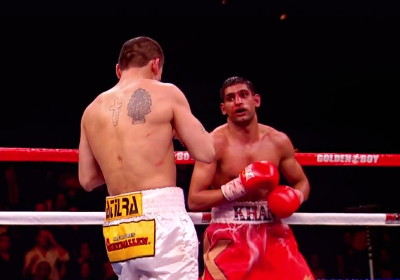 By Scott Gilfoid: WBA welterweight champion Marcos Maidana (35-3, 31 KO’s) finds it amusing that he’s being pushed to give Adrien Broner (27-1, 22 KO’s) a rematch in April when he himself couldn’t get a rematch against Amir Khan after losing a close 12 round unanimous decision against him in December of 2011.

Golden Boy Promotions didn’t get Maidana a rematch with Khan despite the fight being a bout that cried out for a rematch due to how exciting it was, how close it was, and how referee Joe Cortez really got involved in breaking up the action when Maidana was trying to finish off a badly hurt Khan in the 10th, 11th and 12th rounds.

It is kind of strange that Maidana is being pushed to give Broner a rematch after soundly beating him last December, yet Khan, who is also promoted by Golden Boy, has never given Maidana a rematch and their fight was actually close. That was a very close fight and a Fight of the Year type of a bout. Without Cortez as the referee, I think Maidana would have knocked Khan out, because Cortez was frequently separating Maidana from Khan when he was trying to work in close in the critical last few rounds after Khan had been hurt.

It’s disappointing that Golden Boy couldn’t get Maidana a rematch with Khan after all these years. If they’re going to ask Maidana to give Broner a rematch then at least they should gotten Khan to give Maidana one as well. Of course, we’re talking about two popular and valuable fighters for Golden Boy in Khan and Broner. Maidana obviously isn’t in their league in terms of popularity. Had Broner beaten Maidana by a close decision, I doubt that Maidana would be getting a rematch.

With there not being any rematch clause with Broner, Maidana should say no to Golden Boy about giving Broner a rematch unless they promise to give him a fight against Khan directly after that. I think that would be more than fair.

By Maidana fighting Broner in April, he’s missing out on a much bigger fight against Floyd Mayweather Jr. I don’t know that Mayweather has made up his mind yet about who he’ll be fighting on May 3rd. but if Maidana agrees to fight Broner in April, then he won’t even have a chance to fight Mayweather. I think that’s a rotten deal for Maidana. He should leave himself available for the Mayweather fight instead of agreeing to fight Broner in a rematch that is totally unnecessary. I mean, the fight was not close like Khan-Maidana, so why should Maidana have to pull himself out of the running for a Mayweather fight to take on Broner again?