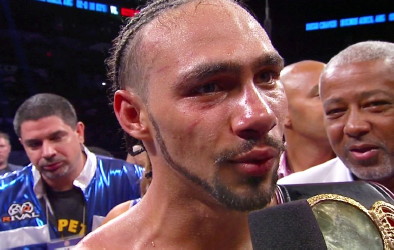 By Jamie Eskdale: I recently wrote an article about who are the most feared/avoided fighters around. There was one fighter who I wanted to include in the article however I resisted temptation because I thought it would only have been fair to devote a whole article to the guy. Step forward Keith ‘One Time’ Thurman.

Keith Thurman has been making his way up the Welterweight rankings almost unnoticed except to the hardcore boxing fan. Adrien Broner’s jump to Welterweight and immediate title shot seemed to take a bit of shine off of Thurman. Never one to bitch or moan Thurman has gone about his business impeccably and shown actions speak louder than words.

Even with the Welterweight division being so rich in talent it has seemed a bit strange that Thurman doesn’t seem to get as much attention as other fighters. Guys such as Amir Khan, Marcos Maidana and Devon Alexander have all garnered more attention than Thurman. This it would seem though is about to change and I really hope 2014 is going to be his year.

I was first alerted to Thurman a few years ago. At first I must admit I couldn’t really see what the fuss was about. HBO’s Max Kellerman seemed very excited about the kid from Florida so I decided I would keep an eye on him and see how he progressed.

What we have seen from Thurman is a guy who has seemed to learn from almost every fight and has progressed through each stage of his career. He seems to have transformed from a brawler type to more of a boxer puncher.

Take his last couple of fights. His fight against The previously undefeated Diego Chaves was supposed to tell us a few things about Thurman, and it did. Thurman showed an ability to take a few heavy shots and something that all good fighters can do, alter his gameplan and fight the fight at his pace. He showed the ability to box, to slug it out, mix up his shots and throw tremendous body shots.

What he also showed was a killer instinct and an ability to finish a fight off.
His most recent fight against Jesus Soto Karass also showed us more. Though what intrigued me was he showed a vulnerability as well. He seemed a bit careless and was wobbled in the first round. Again though he showed his heart, resilience and ability to keep a cool head under pressure and to fight his fight.

Ironically on the same night the guy who I mentioned earlier who has been getting the hype Adrien Broner showed why we maybe shouldn’t pay much attention to the hype sometimes. There’s such a contrast to be made about both guys careers and the way they’ve both been built up. Broner probably has more natural ability than Thurman. Thurman though has been learning more and more on the job to better himself and turn himself into a more complete fighter, while Broner on the other hand seems at times pig headed and would tell anyone who would listen about how great he is.

Thurman however always seems respectful of his opponents and while there is that touch of braggadocio about him he has backed it up more.

I know his level of opponent thus far hasn’t been real top draw but he has steadily built up and as the quality of opponent has gotten better so it seems has he.

He has been talked about as a potential Mayweather opponent and while I think it’s a bit too soon just now, if he does indeed have a good year he may well put himself in a position to land a fight against Mayweather in 2015. It could very well turn out to be a passing of the torch type of match. Though I am getting ahead of myself here I do believe if he keep progressing the way he has been we could see someone special on our hands here.

Once Mayweather bows out the sport we may also see fighters putting less emphasis on the ‘0’ and be more inclined to take risks and fight the likes of Thurman. Boxing and in particular the Junior Welterweight and Welterweight divisions could be on the brink of really exploding into action over the next year or two with so many possible big fights being there to be made.

Thurman can make sure he’s well in the mix by taking care of his business emphatically and really putting himself into the business end of his division.
I have heard the rumours that Maidana has already turned Thurman down in the past but with Thurman being Maidana’s mandatory and both being GBP fighters that would seem a natural match up and one where I would be confident of Thurman being victorious in.

If he were to land that fight and win it then he would be in a much better position to call the shots.

The division would most likely open up a bit for him and bright things would indeed be ahead of him.
Will 2014 be his year? That we do not know yet but I can’t wait to find out.
Follow me on on Twitter @jamieeskdale83

Provodnikov wants Pacquiao or Marquez next »