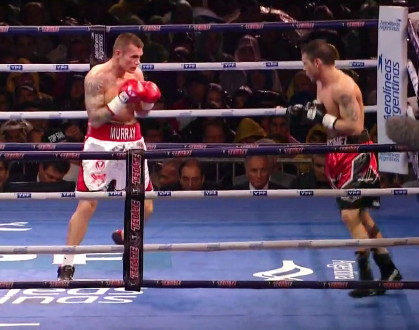 By Scott Gilfoid: In another huge blow to the February 1st Gennady Golovkin vs. Osumanu Card, WBA interim middleweight strap holder Martin Murray (26-1-1, 11 KO’s) has reportedly pulled out of the card for an unknown reason. Murray, 31, had been scheduled to fight #3 WBA, Jarrod Fletcher (17-1, 10 KO’s) in a scheduled 12 round bout.

There’s no word yet whether Murray had second thoughts or if he suffered an injury like fellow UK fighter Nathan Cleverly, who pulled out of the card himself on Tuesday due to an unspecified injury.

Fletcher said this on his Facebook page: “Martin Murray has pulled out of his scheduled fight with Jarrod ‘Left Jab’ Fletcher! ‘Left Jab’ will still fight on the Gennady Golovkin vs. Osumanu Adama card, with the annoucement of the new opponent to be made as soon as possible. I’m a little disappointed but there is no point in getting down.”

The Murray-Fletcher fight was originally scheduled to be for the vacant WBA middleweight title. Golovkin was supposed to be promoted to Super World WBA middleweight champion, but for some reason the WBA failed to make that move. It’s kind of a good thing because having Murray fight for the WBA 160 lb. title straightaway following his loss in his last fight to WBC middleweight champion Sergio Martinez is kind of off putting. It’s not only that.

Murray also fought former WBA 160 lb. champion Felix Sturm for his title in December 2011 and was held to a 12 round draw. Having someone get three chances to capture a title in his last six fights just seems very, very bizarre. I could understand the WBA letting Murray fight for the full title if he had actually beaten someone good in between all these attempts, but Murray hasn’t. He’s beaten Karim Achour, Jorge Navarro and Sergey Khomitsky, and that’s it. Why Murray hasn’t faced a good contender like Daniel Jacobs, Daniel Geale or Sergio Mora is anyone’s guess.

« Floyd’s continuous tirade against Pacquiao shows how bitter he is