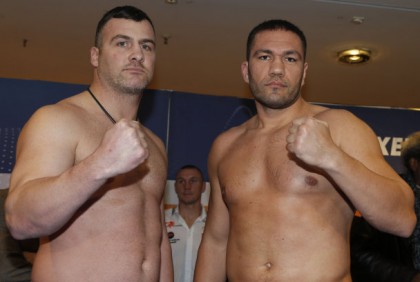 (Photo Wende) By Allan Fox: IBF International heavyweight champion Kubrat Pulev (18-0, 9 KO’s) weighed in today for his title defense against Joey Abell (29-6, 28 KO’s) on Saturday night at the Jahnsportforum, Neubrandenburg, Mecklenburg-Vorpommern, Germany. The 6’4 1/2″ Pulev weighed in at at a solid looking 253.8 lbs. This is slightly heavier than what the 32-year-old Pulev weighed in at for his last fight against Tony Thompson last August. Pulev came in at 252 3/4 lbs. and easily won the fight by a 12 round unanimous decision.

Pulev’s opponent 32-year-old Abell weighed in at 248.5 lbs. This is 8.5 lbs heavier than Abell’s last fight against Maurenzo Smith last July, and more than what Abell usually weighs. However, he’s a replacement opponent for Pulev after the originally scheduled fighter Sherman Williams suffered an injury during training and couldn’t make the weight.

Pulev isn’t taking any risks with this fight because he’ll be facing IBF/IBO/WBA/WBO heavyweight champion Wladimir Klitschko in 2014, as he’s his IBF mandatory challenger. Pulev and his handlers don’t want to see him blow his chance at facing Wladimir because they feel Pulev has a real chance of beating the 6’6″ Wladimir. It’s possible that Pulev may beat Wladimir, but he’ll have to improve his power over his previous 18 fights because right now he doesn’t hit hard enough to be a real threat to Wladmir. Pulev is similar to Wladimir’s recent opponent Francesco Pianeta in the power department, and that’s not going to get the job done against a hard hitting like Wladimir.

Below are the weights for tomorrow night’s fight: