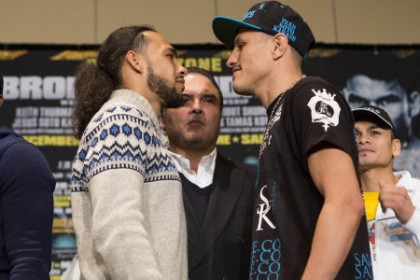 (Photo credit: Esther Lin/Showtime) By Sevak Sarkisian: As most fight fans already know, Keith Thurman (21-0-19Ko’s) will be facing tuff Mexican veteran Jesus Sotto Karass (28-8-18Ko’s) this Saturday. The bout will be the co-future for the Broner v Maidana card in San Antonio Texas and will be televised live on Showtime.

Keith Thurman was originally viewed as an exciting big puncher, however he has proved over the course of his last few fights that he is much more than just a big puncher. Thurman possesses good boxing skills and knows how to use the ring well when he has to. He also has a high boxing I.Q and has shown that he can make adjustments in the middle of a fight. Thurman also possesses an offensive mentality and always brings a lot of tenacity into the ring each time he fights.

Jeseus Soto Karass on the other hand has had a career with various ups and downs. He holds good wins over Andre Berto, Selcuk Aydin and Vince Phillips. Karass has good size for a welterweight. He likes to stay in front of his opponents and throw punches in high volume. However, he leaves himself open a lot and is easy to hit and lacks some speed athleticism and reflexes. But the tuff Mexican is battle tested and he can certainly take a punch.

I’m looking forward to this fight and I wouldn’t be surprised if it stole the show. I expect Thurman to win in great fashion and make a big statement. Karass is perhaps the most experienced fighter Thurman has yet faced in his young career but he is simply way to easy to hit and lacks some skills.

« Will Stevenson and Kovalev be HBO’s secret weapons in battle with Showtime in 2014?