Thurman’s win over Soto Karass not enough to get Maidana 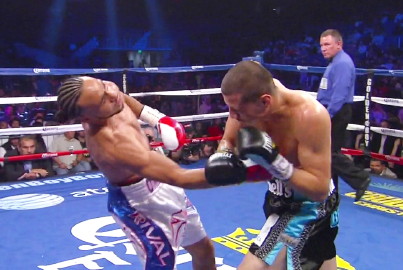 By Dan Ambrose: Interim WBA welterweight champion Keith Thurman (22-0, 20 KO’s) demolished #6 WBA Jesus Soto Karass (28-9-3, 18 KO’s) by a 9th round TKO last night at the Alamodome, in San Antonio, Texas, USA. While it was a decent performance from Thurman, it probably wasn’t an impressive enough fight for him to get a title shot against newly crowned WBA champion Marcos Maidana yet.

Thurman was good, but he shaken up in the 1st round by the slow as molasses Soto Karass, and we don’t know what would have happened if he gone after Thurman to try and finish him off the way he should have.

A normal fighter would have unloaded everything on Thurman after hurting him with a right hand like Soto Karass did last night in the 1st. It was a grave error on Soto Karass’ part and he paid for it by losing the fight. But more importantly, Thurman spent too much time running around the ring from Soto Karass and it wasn’t a crowd-pleasing performance by any means.

The stoppage by Thurman in the 9th was nice with him hurting Soto Karass with a big left hook and then following it by two right hands to the head followed by a big left hook that dropped him. However, Thurman was moving from the time he got hurt until the 9th round, and it was like watching the opposite of Marcos Maidana.

Some boxing fans assumed that the Thurman-Soto Karass fight would be the most exciting fight on the card, but it wasn’t even close to that. It was rather dull because of Thurman’s running, and I think his stock dropped from this fight. Even fighters that are known for using movement like Floyd Mayweather Jr. don’t move as much as Thurman did last night. He just looked scared and unwilling to stand in the pocket against Soto Karass until he was tired in the 9th.

Maidana can get much bigger fights than Thurman, and I expect that to happen. Thurman needs to face some better opposition than Soto Karass, because there are a lot better fighters than him. Thurman needs to focus on being more crowd pleasing and more offense-minded. If his thing is he wants to be a runner, then Showtime shouldn’t be televising his fights because that wasn’t an interesting to watch. It was kind of a buzz kill before the main event because it just looked so funny with a big puncher like Thurman running from a light puncher like Soto Karass.

I think Maidana would knock Thurman out if that fight were to take place, but I also don’t think it’s interesting fight compared to a lot of the other options Maidana has going for him. He doesn’t need to be facing an opponent that he’s going to chase around the ring for 12 rounds in Thurman. Even Amir Khan stood in the pocket against Maidana in their fight in 2010. I can’t see Thurman doing that. He would likely make fans dizzy with his constant circling the ring, and that’s just not interesting. I want to see Maidana in with exciting fighters with crowd-pleasing fighting styles. I don’t want to see him in with a runner.

« How Marcos Maidana Toppled the King in Waiting