How Marcos Maidana Toppled the King in Waiting 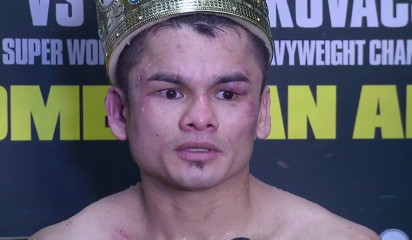 By James Connell: The sound and fury that has been built by Golden Boy, Al Haymon’s team, HBO, Showtime and everyone else who has had a stake on Adrien Broner’s success, will now hopefully be quiet for a short while after Broner lost a deserved unanimous decision to Marcos Maidana.

The boxing press – including several prominent contributors to this site – didn’t give Maidana a cat’s chance in hell against boxing’s, supposed, next pay-per-view star, and the self-acclaimed heir to Floyd Mayweather’s pound-for-pound title. One can only wonder at why the odds on Maidana were so long: his style, punching-power and weight were all wrong for Broner; it’s fine to have expected Broner to win, but this fight, at its widest, was only ever a 60-40 one in favour of Broner. I guess the almost universal shock in reaction to Maidana’s clear victory displays the true strength and power of the promotional teams in this sport.

How did Marcos Maidana de-throne the WBA welterweight king? He simply outworked, out-manned and outthought him. Maidana threw almost a thousand punches in reaction to the four hundred Broner did: clearly, Robert Garcia and his team took this as the key lesson from Broner’s split-decision, disputed victory over Paulie Malignaggi: Broner’s defence may only be, at best, Mayweather-lite, but it’s still a strong one to penetrate.

Maidana’s body-work was exemplary, another tactic that was clearly picked up from Malignaggi’s fight with Broner, but vitally, Maidana had the power in his fists to make Broner worry about the shots he was taking to the body. Indeed, Maidana’s early jabs to Broner’s mid-rift were vital, as they forced him to drop his guard, opening him up to Maidana’s newly-acquired brutal left hook: a shot to go alongside his already devastating wide right hands.

Taking tactical cues from Paulie Malignaggi is a clear indication of the astute planning done by Robert Garcia, Malignaggi has long since made up for his lack of power with his stunning ring nous and intelligence. Marcos Maidana deserves immense credit for never slacking and, in a sense, getting the victory that Paulie probably couldn’t. Unlike Floyd Mayweather, there clearly is a blueprint to beat Adrien Broner, as displayed in his three toughest fights: the dubious victories over Daniel Ponce de Leon, Paulie Malignaggi and the loss last night to Marcos ‘Chino’ Maidana. Maidana’s victory further shakes up the welterweight division: not many people gave him, or Shawn Porter, a chance, and on consecutive Saturday nights, the whole division has been rocked.

What now for Adrien Broner? It will be tough for a man who has gained the ill-will of many to recover from such a loss, one in which he hit the canvas twice and was rocked hard half-a-dozen further times. Quite simply, many go to his fights, and tune in, to see him lose. He should take this as a harsh lesson, teaching him to cut out the needless posturing, rapping and parties: he needs to decide whether he wants to be a boxing superstar, or just another contentious footnote in this great sport’s history.

We all know that he is greatly talented, but he has never ironed out crucial flaws such as his clumpy footwork, refusal to work for three minutes a round and his clear inability to box on the back foot. Broner clearly has gotten used to dining out on tough lightweights who will get backed up by his superior speed, power and size. Marcos Maidana is a relatively small welterweight, yet he often bored Broner to the ropes: Broner is not yet strong enough to function in title fights with decent sized welters.

There was a touching moment in his corner late on, when Mike Stafford cut out all of Broner’s line of bull, and told him he needed him to let his hands go: Broner met his eyes, and looked like a child lost.

« Broner: I want a rematch; I don’t need warm-up

Thurman’s win over Soto Karass not enough to get Maidana »