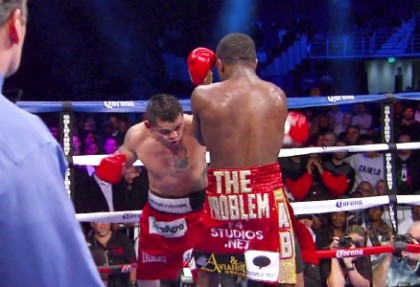 By Eric Thomas: Former WBA 147 lb. champion Paulie Malignaggi (33-5, 7 KO’s) says he wants to fight Marcos Maidana (35-3, 31 KO’s) next, following Maidana’s upset victory over Adrien Broner (27-1, 22 KO’s) last night at the Alamodome in San Antonio, Texas. Malignaggi, who worked the fight for Showtime as an analyst, said he liked what he saw from Maidana. But Malignaggi also feels that his style matches up well with his.

When asked by Chris Robinson of Hustleboss if he’d like to fight Maidana next, Malignaggi said “Yes!” The next question was ‘Why do you think you can beat him.” Malignaggi said “Because I throw punches, not like Adrien Broner.”

Last June, Malignaggi suffered a controversial 12 round split decision loss to Broner in Brooklyn, New York. Malignaggi was furious after the fight and felt that he had been robbed. Even months later, Malignaggi said that last night’s fight should have been him fighting Maidana instead of Broner.

Maidana vs. Malignaggi is a good option for both guys. Malignaggi has the kind of fighting style that might give Maidana problems with his fast hands, jabbing and excellent defense. He’d make it problematic for Maidana to land his power shots because he wouldn’t stand in front of him the way that Broner did.

Malignaggi would also throw a lot of fast shots to keep Maidana from being able to line up his big power shots. It would still be a very difficult fight for Malignaggi because he would take a great deal of punishment in the first four rounds even with him fighting defensively.

Maidana will likely attempt to get a fight against Floyd Mayweather Jr. next. But if that fight isn’t available to him, then Malignaggi could be a possibility. A rematch against Broner might be better option for Maidana though for him to get a bigger payday. Malignaggi would be someone that would likely be a third or possibly even a fourth option depending on if Saul “Canelo” Alvarez shows interest in fighting Maidana. Even someone like Miguel Cotto might suddenly desire a fight against Maidana because that would be an excellent match-up for Cotto. Maidana’s fighting style would be tailor-made for Cotto. That’s not to say that Cotto would beat him, because he does have a lot of mileage on him from his many wars. But it would be a fight that in theory Cotto would do well in.

Malignaggi vs. Keith Thurman would be an interesting fight as well. The winner of that fight could face Maidana if he doesn’t lose his next fight.

« Thurman’s win over Soto Karass not enough to get Maidana

Adrien Broner exposed by Maidana and here’s why »