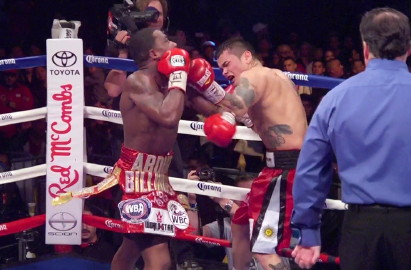 By Allan Fox: WBA interim 147 lb. champion Keith Thurman saw last Saturday’s fight between WBA welterweight champion Adrien Broner and Marcos Maidana and he feels that Broner wasn’t nearly ready for the type of fight that he needed to fight in order to beat the hard hitting Maidana.

Thurman notes that Broner didn’t use movement, didn’t throw a lot of punches, and he didn’t appear to be mentally ready to fight in the aggressive manner that he needed to in order to beat Maidana. Broner’s loss came to no surprise to Thurman, because with the way that Broner fought, he deserved to lose

Thurman is the mandatory challenger for Maidana, and he’s hoping that he can get that fight next if possible. Maidana isn’t tipping his hand yet about who he plans on fighting next, but it’s probably not going to be Thurman. Maidana had a chance to fight Thurman last year, and he opted not to accept it.

“I don’t think Broner was ready for the toughest fight of his life, and El Chino was ready,” Thurman said via RingTV. “He [Broner] was inactive, and you really can’t win fights that way unless you’re landing the power shots.”

Thurman doesn’t think Broner was willing to work hard enough to make up for his flat-footed stance and his lack of movement. It makes sense what Thurman is saying. Broner looked like he was conserving energy for much of the fight for some reason. Broner appeared to be fighting in 1st gear when he should have been going all out the same way that Maidana was.

If Broner wasn’t willing to slug with Maidana then he needed to use movement to avoid Maidana’s shots and limit the amount of times he was getting nailed by him. But Broner has never shown the ability to move around the ring, and it appears that his upper body is too heavy for his legs to carry him around the way Floyd Mayweather Jr. moves. Broner has the body of a wrestler, and he doesn’t not get around the ring well. That’s perhaps the main reason why he’s never incorporated that part of Mayweather’s fighting style into his own. Broner doesn’t seem capable of doing that.

Thurman’s adviser Al Haymon will find a good opponent for his next fight if he can’t line up a fight against Maidana. Thurman feels that he’ll get the shot against Maidana sooner or later given that he’s the #1 mandatory for the WBA belt. Maidana can bypass him now but eventually he’ll have to face him.

Schaefer not sure if Broner will stay at 147 »