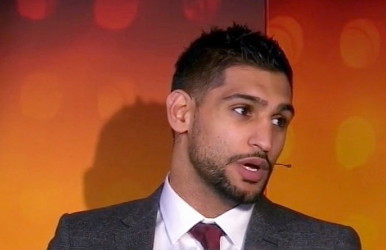 By Scott Gilfoid: Amir Khan (28-3, 19 KO’s) is expecting Floyd Mayweather Jr. (45-0, 26 KO’s) to make an announcement in the next couple of weeks naming him as his opponent for his May 3rd fight in Las Vegas, Nevada. Unlike Mayweather’s past opponents who have remained quiet about their status of getting chosen by him, Khan has been openly yaking it up about the Mayweather fight. It kind of takes all the mystery out of it when you’ve got Khan naming himself already as Mayweather’s next opponent.

“It’s the fight I’ve always been after and we’re very close now, not too far away,” Khan said to Sky Sports. “Hopefully something is going to be announced within the next couple of weeks…I have no doubt I can take it. I’ve already been working on correcting the mistakes I’ve made in the past, so you’re going to see an improvement.”

It’s pretty anticlimactic when Mayweather does announce the Khan fight, because it’s been out there for too long. The only way Mayweather could surprise anyone is if he did something completely unexpected like chosen to fight a rematch against Saul “Canelo” Alvarez or face someone like Erislandy Lara. The boxing public would never expect Mayweather to fight either of those guys for his next fight.

As far as Khan fixing his flaws to the point where he can beat Mayweather, I don’t see how Khan can fix the flaws that are permanently built into his game. I’m talking about his chin. I’ve never known of a fighter that had a fragile chin throughout his career and then suddenly it got better.

It tends to get worse rather than better, and if he faces Mayweather on May 3rd, I expect Khan to be knocked out fairly quickly in this fight. Khan can improve his defense, but I don’t see him being able to strengthen his punch resistance. I see that as a permanent thing for him that is beyond repair.

Khan really should have to fight Marcos Maidana for the right to fight Mayweather, because he still needs to redeem himself for his losses to Danny Garcia and Lamont Peterson. How is going to look if Mayweather fights someone with 2 defeats in his last 4 fights like Khan? Khan needs to fight Maidana again and he needs to fight himself with a referee that won’t get in the way of Maidana while he’s trying to knock Khan out. I still can’t forget how referee Joe Cortez found himself in between Maidana and Khan in the last three rounds of their fight in 2010 when Khan was on bambi legs after getting badly hurt by Maidana.