Schaefer not sure if Broner will stay at 147 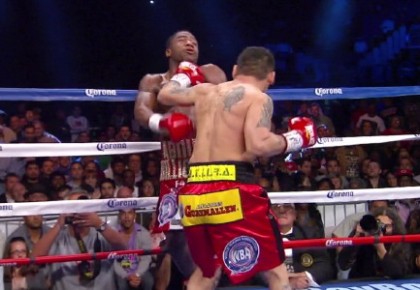 By Eric Thomas: Golden Boy Promotions CEO Richard Schaefer says he’s not sure if Adrien Broner (27-1, 22 KO’s) will stay in the welterweight class now that he’s been beaten by Marcos Maidana. Schaefer says that Broner can still make the lightweight class, where he still holds the WBC lightweight title. Schaefer thinks Broner might drop back down to 135 to continue campaigning as a lightweight.

Based on the comments that Broner has said since his loss about wanting an immediate rematch with Maidana, it doesn’t look at the moment that Broner plans on going back down to 135. His ego could be keeping from making that move at the moment.

It might take another loss to Maidana to nudge Broner back in the direction of the lightweight division, because a second loss to Maidana would effectively finish Broner as a major player in the 147 lb. class. If Broner still chooses to stay in the weight class after that then he would have to understand that he would would have to fight tooth and nail to get to the level he previously was when fighting in the super featherweight and lightweight divisions.

Schaefer isn’t saying what he wants Broner to do, but he might be more useful to Golden Boy if he were to move back down to the lightweight division where Golden Boy can sell him as one of the most dominant fighters in that division. With Broner’s loss to Maidana and his near loss to Paulie Malignaggi last June, you can’t say that Broner is one of the top guys in the welterweight division. He’s one of the contenders at 147, but not one of the very top guys. Maidana effectively weeded Broner out of the top rung of the division with his win. Broner obviously wants a quick rematch so that he can regain his status as one of the best at 147, but he’s going to need to improve a lot for him to beat Maidana in a rematch.

Examining the heavyweight scene in a post Klitschko era »