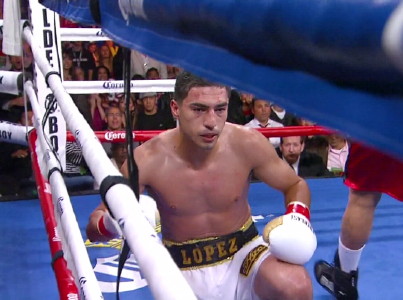 This really isn’t much of an undercard. Marquez is way, way past his prime and Josesito Lopez’s 15 minutes of fame appears to be over now that he’s been stopped by Saul “Canelo” Alvarez and Marcos Maidana in back to back fights.

Marquez’s career has really gone downhill after his four fights with Israel Vazquez. Marquez has lost 3 out of his last five fights and looks nothing like the fighter he once was in his 20s and early 30s. He’s coming off of a 9th round stoppage loss to Christian Mijares from last October in a fight that he didn’t look good at all in after the first few rounds. Marquez was also beaten by Toshiaki Nishioka in a 12 round decision loss in October 2011, and beaten by Juan Manuel Lopez in an 8th round stoppage defeat in November 2010.

At this point it’s difficult to figure out why Marquez is still fighting other than the paychecks he gets for the fights. His chances of winning another world title are slim at his age, and even getting another world title would seem out of the question unless one of the featherweight champions choose to fight him due to his name recognition value.

Esquivias, 30, has lost two out of his last three fights in defeats against Rico Ramos and Jhonatan Romero. In his last fight, he fought to a 2nd round technical draw against Victor Sanchez.

Josesito Lopez needs to stop the bleeding with his career, as he’s lost his last two fights to Maidana and Canelo.

« Pacquiao has rebounded from KO losses before