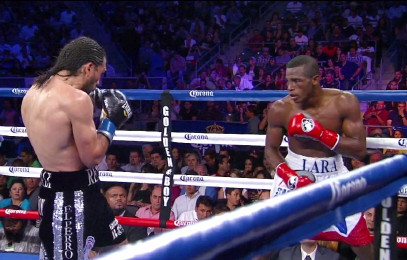 Trout was beaten by Canelo last April by a 12 round unanimous decision in a fight that many boxing fans had Trout as the winner or least deserving of a draw.

Lara said to RingTV “I feel I would stop him [Trout]…he says he wants it, I want it, let’s do it…Trout is the best available guy, so if it’s on the card or any time, I’m ready.”

Trout vs. Lara would be a huge fight for the Mayweather-Canelo fight card. They’re already talking about having Danny Garcia vs. Lucas Matthysse on the card, and that’s a huge fight too. But when you add Trout-Lara to the card, it gives fans three big fights for $65 to $75 on pay per view. That’s a good deal.

Lara recently stopped Alfredo Angulo in the 10th round last June in an exciting back and forth fight. Angulo had control over the fight and was able to knock Lara down in the 4th and 9th rounds after taking massive amounts of punishment. In the 10th, however, Angulo turned his and appeared to quit after getting nailed with a hard left hand on his swollen eye. Angulo would later say that he wasn’t quitting; he had been thumbed in the eye.

Trout will have to find a little power for this fight because Lara could pile up a lot of rounds with his hard left hand power shots and his steady work. Angulo wore Lara down with body shots, but eventually his swollen eye become too much of a problem for him to continue fighting.

Cleverly happy Kovalev will be trying to KO him »