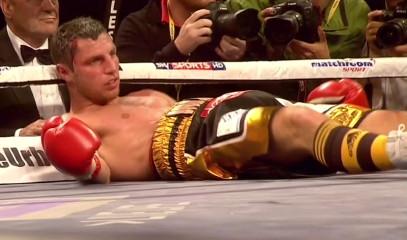 Trailing on the cards going into the 10th round, Mathews nailed Coyle with a huge left hook to the head that knocked him down flat on his back on the canvas.

Although the 23-year-old Coyle made it back to his feet, referee Phil Edwards chose to halt the fight after seeing how hurt Coyle was upon getting up. The official time of the stoppage was 2:41 of the 10th round.

Mathews was dominated for most of the fight. He just didn’t have the skills to compete with Coyle until the 10th. Going into that round, Mathews looked like he was heading towards certain defeat. Coyle cut left eye and was pounding him at pretty much at will with hard power shots. Mathews looked weary and wasn’t throwing punches back like he had in the previous rounds of the fight. Perhaps for this reason, Coyle forgot all about his defense and just focused on throwing bombs.

Unfortunately for him he walked into a big left hook that Mathews threw with almost desperation. The shot had everything that Mathews had left in his body, and it was more than enough to stop Coyle in his tracks sending him down back first on the canvas. Coyle’s head hit the bottom rope and that might have saved him from getting a hard recoil off the canvas had he fallen without the ropes stopping his head.

After the fight, Coyle asked for a rematch and Mathews agreed to fight him again. Whether the biggest fight out there for Mathews is unclear at this time, but you’ve got to figure the fight will happen if Mathews doesn’t have anything else on his plate.