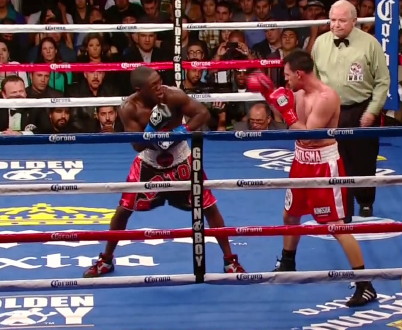 By Allan Fox: Former IBF/WBC welterweight champion Andre Berto (28-2, 22 KO’s) will have his career on the line this Saturday night against Jesus Soto Karass (27-8-3, 17 KO’s) in their fight at the AT&T Center, in San Antonio, Texas, USA. Berto, 29, cannot afford to lose this fight, because he’s already lost 2 out of his last 3 bouts, and it’s at the critical stage where another loss will signal the end of Berto as far being a contender.

He’s got a new trainer in Virgil Hunter, so he can’t make any excuses about not being at his best. Hunter is one of the best trainer’s in all of boxing, and he’s not going to let Berto get into his bad habits of fighting off the ropes and trying to use the shoulder roll defense.

Berto already he’s not going to use the shoulder roll for this fight, which is a good thing because he looked lost trying to employ it in his last fight against Robert “The Ghost” Guerrero last November in losing by a 12 round unanimous decision.

If Berto wins that fight, he’s not going to automatically get a big money fight against Floyd Mayweather, Saul “Canelo” Alvarez or Manny Pacquiao. It’ll just mean that Berto will have picked up and win and will need to keep winning over better opposition to redeem himself from his defeats at the hands of Guerrero and Victor Ortiz. But the winner of the Thurman-Chaves fight will be in line to get a shot at the WBA title held by Adrien Broner.

That doesn’t mean that they’ll get a shot immediately against Broner, but it does mean they’ll be close enough to eventually get a crack at him or the belt he’s holding, if he chooses not vacate the title rather than facing Chaves or Thurman.

That’s a very real scenario unfortunately, because Broner didn’t shine in his first fight at 147 against Paulie Malignaggi, and it wouldn’t be surprising to see him give up the title rather than take a fight against a big welterweight like Thurman and end up getting exposed.

« Byrd: Chisora has a question mark next to his win over Malik Scott