Lennox Lewis: One of the greatest ever 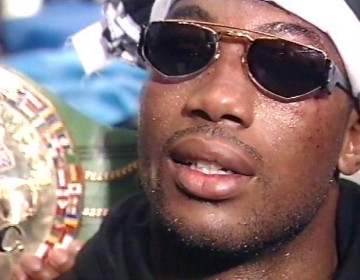 By Daniel Mcglinchey: In my eyes the former Undisputed Heavyweight Champion of the world Lennox ‘The Lion’ Lewis (41-2, 32 KO’s) is without a doubt one of the greatest Heavyweight fighters to ever step into the ring.

Born in London, England Lennox always had a keen eye for sport excelling in Football (Soccer) & Basketball. At the age of 12, Lennox moved to Canada where he found a taste for Boxing. Lewis collected a very impressive amateur record of 94-11 and won gold at Olympics in Seoul, South Korea in 1988.

Lewis decided to turn pro and move back to his native England aged 23, where he signed with promoter Frank Maloney. In his first year as a professional, Lewis collected a record of 14 straight wins, 12 by knockout, his 14th win being him claiming the European Heavyweight Title. He went on to defend that title numerous times, whilst also gaining the Commonwealth Title and the British Title, defeating such names as Gary Mason & Donovan Ruddock.

Lewis was mandatory for the WBC strap, but the then current champion Riddick Bowe was not prepared to face him, so he was stripped of his title and it was awarded to Lennox. Lennox would make his first defence against dangerous American Tony Tucker who had only lost 1 fight from 49 outings; Lewis made light work of Tony cruising to a 12 round unanimous decision, dropping Tony in rounds 3 & 9. Lewis defended the title a further 2 times destroying the heavy handed Frank Bruno & Phil Jackson.

In his next fight Lewis suffered his first ever defeat against Oliver McCall. The ref stopping the bout in the second round. Lennox was devastated as he knew he was a superior boxer to McCall, but didn’t perform on the night. Lewis chased McCall for nearly 3 years, desperate for a rematch, destroying the likes of Tommy Morrison & Ray Mercer in the process. In February 1997, Lewis got his much awaited rematch against McCall, and bullied him over 4 rounds. Lewis eventually put Mccall out of his misery in the 5th retaining the WBC strap. Lewis would go on over the next 2 years to defeat massive names such as Henry Akinwande, Andrew Golota & American Shannon Briggs amongst others.

In March 1999, Lewis faced his biggest test to date WBA & IBF champion Evander Holyfield. Lewis, in most people’s eyes, won the fight fairly comfortably, but fighting in Holyfield’s home country of America, Lewis had to settle for a draw. A rematch was automatically scheduled this time including the vacant IBO Title. Lewis would not be robbed this time and grinded out a Unanimous Decision win.

In the year 2000, Lewis would go onto walk through the then largely hyped undefeated Michael Grant in 2 rounds, and did the same to Frans Botha in as many rounds. He then faced Samoan Native David Tua who had himself collected a very impressive record of 37 wins and 1 defeat. Lewis would dominate the action and sail to a Unanimous Decision.

In 2001, Lewis faced Hasim ‘The Rock’ Rahman and was caught with a shot in the 5th round which he failed to get up from, Lewis again went straight on the hunt for a rematch knowing he was the superior fighter. He got his wish. In late 2001, the highly anticipated rematch took place in the Mandalay Bay Resort & Casino, Las Vegas, Nevada. Lewis controlling the first 3 rounds comfortably stepped up the pace in the 4th landing one of the best punches I have ever seen, sending Rahman to another planet. Lewis was then crowned once again Heavyweight king.

In June 2002 perhaps one of the biggest Heavyweight fights in years was finally made, Lennox Lewis vs. Mike Tyson. Don King had protected Tyson from Lewis for many years, but the bout was finally made. Lewis, 1 year older than Tyson, used his jab effectively for the opening few rounds making Tyson look silly at times. Tyson Previously undefeated for 5 years prior to this bout could not get to grips with why the older Lewis was dominating him so easily. Mike all over the place was eventually put out of his misery by a peach of a right hand in the 8th leaving Tyson in a heap on the floor.

Many expected Lewis to retire after the Tyson clash being just shy of 40 years old, and financially comfortable for the rest of his life, but Lewis was eager for just one more fight. In June 2003, a fight was scheduled with rising star Vitali Klitschko. It was fairly obvious how aged Lewis looked and how out of shape he was, but unwilling to accept defeat, Lewis plowed through a difficult few rounds being slightly behind on the score cards. Midway through the fight, Lewis started to land some devastating shots, leaving Vitali’s face, too put it bluntly, in a horrendous state. An exhausted Vitali, willing to carry on, was unable to due to the fact his face looked like it had been put in a blender. The fight was called to a halt and Lewis added another W to the collection.

For me, Lennox Lewis is ranked in the top 3 Greatest Heavyweights of all time behind Muhammad Ali & Joe Louis; He is the last Undisputed Champion of the world and is one of only 3 Heavyweight Champions in the history of boxing to have defeated every opponent he faced; the other 2 being Rocky Marciano & Ingemar Johansson.

Lennox always stated about his heritage “Britain is my mother, Canada just nurtured me for a little while.”

« The fights that need to be made