The fights that need to be made 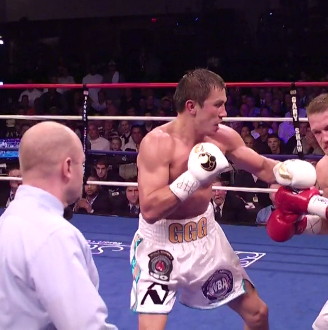 By Onaps: Boxing fans are like classical music lovers to MMA’s headbangers ball, and as a boxing fan, these hard headed promoters needs to realize that some classic music needs to be made amongst each other.

All boxing fans deserve the best fights to be made. So, I am comprising a list of the top 10 fights that boxing fans news to see

10). André Ward vs. Bernard Hopkin: This is a classic, passing of the torch fight. Hopkins is the only challenge near his weight beside possibly André Dirrell (who needs to get active before his prime passes him by). I don’t see Ward losing to B-Hop, although it would be an interesting contest.

9). Gennady Golovkin vs. Peter Quillin: This would be a unification bout and One hell of a dog fight. Both of these combatants impress me more every time out. I believe Golovkin, with his pedigree and power would prevail, but don’t count out Kid Chocolate, he is a dog with bite.

8). Guillermo Rigondeaux vs. Mikey García: I really do not have to say much about This one. Two of boxing’s best, in the same ring, a terrific scrap. I see García winning a close competitive chess match, although I wouldn’t bet on it.

7). Adrien Broner vs. Timothy Bradley: This would pose a huge step up for “The Problem” Broner, and would be a good measuring stick to see if Broner is elite. I see Broner beating Bradley in a tight decision.

6). Tyson Fury vs. Deontay Wilder: This scrap needs some seasoning, and I couldn’t pick a winner, but would bring some life info the heavyweight division.

5). Julio Cesar Chávez Jr. vs. Carl Froch: Talk about a slugfest. With Jr’s chin & sheer size, he would give Froch fits, although “The Cobra” Froch would eventually catch him, hurt him, and win a competitive bomb fest.

4). Keith Thurman vs. Devon Alexander: Why not? Thurman wants a big test, and here it is. I believe Alexander would Box circles around Thurman, but with that equalizer punching power, this would be a good fight.

3). Saul “Canelo” Álvarez vs. Gennady Golovkin: I know Golovkin is already is on my list but this is a fight that would be a true test for both. I see Golovkin stopping Canelo in the 10th or 11th rounds, but it would be good while it lasted.

2). Floyd Mayweather Jr. vs. Manny Pacquiao: Not the fight it once could have been, but still should happen. I see Mayweather making Pacquiao look foolish before stopping him in 8.

1). Floyd Mayweather Jr. vs Saul “Canelo” Álvarez: This is the biggest fight in boxing now. I see “Money” Mayweather winning a close decision if it happens soon; otherwise, its hard to call.

I can go on forever. Let’s get some of these fights made.

« A Look Forward to this Weekend’s Boxing

Lennox Lewis: One of the greatest ever »