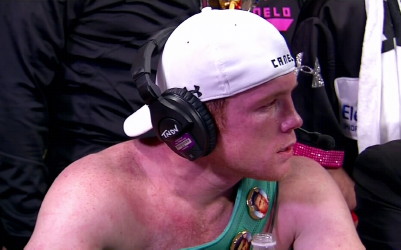 By Dan Ambrose: Still hoping to get a fight with Floyd Mayweather Jr. in September, WBA/WBC junior middleweight champion Saul “Canelo” Alvarez will be attending this Saturday’s fight between Mayweather Jr. and Robert “The Ghost” Guerrero at the MGM Grand in Las Vegas, Nevada. Miguel Cotto will also be in attendance, and I imagine he might want to fight the winner of the Mayweather-Guerrero fight as well. I suspect that Cotto has a much better chance of fighting Mayweather than Canelo does.

Canelo weighed 172 lbs. for his fight last month against WBA junior middleweight champion Austin Trout in San Antonio, Texas, and he badly wants to fight the much smaller, 150 pound Mayweather Jr. in September, and Golden Boy Promotions also wants that fight to happen due to the huge money it would bring in for them.

Richard Schaefer, the CEO of Golden Boy, said to RingTV “Floyd wants to be involved in the biggest fights, so depending on how this goes this weekend [between Guerrero and Mayweather], he’s going to look at who is available…I think that a potential fight between Mayweather and Canelo is without any question the biggest fight that you can make in the sport.”

Well, there’s just one problem that gets in the way of a Mayweather-Canelo fight from being made and that’s the huge, huge size difference between the two fighters.

Canelo is three divisions heavier than Mayweather when he fights, and that pretty much makes the fight impossible to make. When you’re talking about having a light heavyweight [Canelo] fight a welterweight [Mayweather], it’s not a fair fight. I’ve said this before, but I’ll say it again; when we start seeing Canelo matched up against fighters that are 20 to 25 pounds heavier than himself at cruiserweight, then there’s point in asking Mayweather to fight an opponent like Canelo, who is 20 to 25 pounds heavier than him.

I’d like for the fight to be made, but if there’s no way to keep Canelo from coming into the fight out-weighing Mayweather by well over 20 pounds, then how do you make a fight like that? It puts Mawyeather at a huge disadvantage because he’s a light heavyweight, not a welterweight or a junior middleweight. 172 equals a light heavyweight.

Canelo’s fans have the belief that it doesn’t matter if Canelo has a 25 pound weight advantage because Mayweather beat Miguel Cotto to capture the WBA junior middleweight title. Cotto weighed 165 pounds in that fight, but Mayweather took a lot of punishment due to Cotto’s huge weight advantage. Now, Mayweather would be asked to fight an even heavier Canelo, and that’s just not realistic.

I think the fight could and should happen if Canelo agrees to fight Mayweather at 147 with a rehydration limit of 154 to keep Canelo from bloating up to 170+Canelo will probably never agree to this, and that’s, but on him.

If he doesn’t want to make it an even playing field, then he should have no business fighting guys that are much lighter than him. If he wants to fight guys that won’t say no to him, then he should stick to fight guys his own size or at least 18 pounds lighter than him at 154. But to ask Mayweather to fight a guy that out-weighs him by 20-25 pounds is just wrong, and Mayweather would be making a huge mistake in taking the fight.

I’d like to see Canelo fight someone his own size in terms of weight like Andre Ward, Carl Froch or Mikkel Kessler, but I don’t think that’s going to happen in this lifetime. I’d like to see Canelo try and fight someone 20 to 25 pounds heavier than him so that he could see what it’s like to be at a weight disadvantage like how Mayweather would be, but that’s not going to happen either.

If you put Canelo in with Marco Huck, the WBO cruiserweight champion, I think Canelo would get his head taken off at the shoulders. It wouldn’t matter that Canelo would play defense like he did against Trout. Once Huck did land, that 20 to 25 pound weight advantage would help him knock Canelo out cold, and Golden Boy won’t let that happen.

« Lennox Lewis: One of the greatest ever