Khan-Diaz: Amir looking to get back to world level 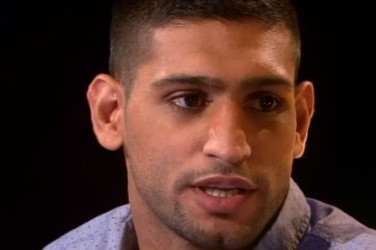 By Scott Gilfoid: Amir Khan’s stock has dramatically fallen in the past two years since he took defeats at the hands of Lamont Peterson and Danny Garcia. Those defeats have shown to some that Khan doesn’t have the chin or the skills to fight at the world level.

Now, Khan is facing the 33-year-old Diaz on April 27th at the Motorpoint Arena, Sheffield, Yorkshire, United Kingdom. This will be Khan’s first fight in the UK in two years, and his promoters at Golden Boy have picked out a guy that they feel Khan can beat and look good against to move him forward to face the winner of Golden Boy’s four-fighter tournament in December.

A victory over Diaz won’t prove that Khan is back at the world level given that Diaz is a 2nd tier welterweight and not ranked in the top 15. Khan won’t be able to prove that he’s at the world level until he gets in the ring with Danny Garcia again or someone like Lucas Matthyse or Lamont Peterson.

Khan’s fight with Diaz will at least give boxing fans a glimpse and a picture of what Khan’s chances are going to be like when he does face the winner of the tournament. I mean, there is a chance Khan could lose to Diaz, especially if Diaz is able to get Khan into a dog fight.

Khan’s trainer Virgil Hunter is trying to teach Khan some restraint so that he stops trying to slug it out so much because his chin isn’t strong enough for that kind of fighting style. However, Carlos Molina was able to easily draw Khan into slugging exchanges repeatedly last December, and Hunter looked helpless to stop Khan.

You could hear him talking to Khan during the rounds, but Khan, like always, was doing his own thing and just looking to punch. Khan came out on top in that fight, but only because Molina had no power to speak of and was much smaller.