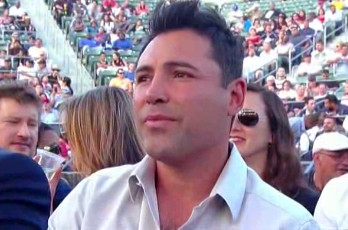 By Allan Fox: Oscar De La Hoya was surprised with HBO’s move made earlier today to sever ties with Golden Boy Promotions fighters, and no longer televise their fights. De La Hoya, the president of the company a former star for HBO that made them millions of dollars during professional and promotional career, sees it as a self-defeating move by HBO due to Golden Boy having so many talented fighters in their stable.

De La Hoya said on his social media site: “Game on!! I am so pumped to bring all the great fights to @SHOsports and CBS. Good luck With your captain sailing you through the Dead Sea…I’m surprised @HBOboxing would make such a bold move. Don’t they know GBP is stacked with talent?”

What HBO seems to be forgetting is that Top Rank, which will be supplying most of their talent for their fights, is headed by an 81-year-old CEO in Bob Arum. He’s not going to be around for too much longer, and who knows how well the promotional company will do once Arum is gone. Golden Boy has younger executives in charge, and they’ve got the top fighters in Saul “Canelo”, Adrien Broner, Danny Garcia, Amir Khan, Lucas Matthysse, Austin Trout, Lamont Peterson, Bernard Hopkins and a close association with Floyd Mayweather Jr.

I don’t expect HBO to freeze Golden Boy out permanently because HBO president Ken Hershman may not be around forever, especially if this move ends up hurting HBO in their ratings. Believe me, if HBO’s ratings tank big time because of this someone is going to be the fall guy, and the people above Hershman may not be happy with seeing the results of this.

Golden Boy CEO Richard Schaefer says he’s not surprised that this move was made by HBO because he hasn’t spoken with Hershman since last November, and he sees this as the fallout from HBO’s loss of Golden Boy fighters Canelo and Mayweather to Showtime.