Abraham needs to move back down to 160 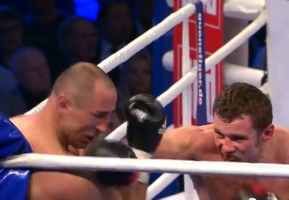 By Eric Thomas: If we learned anything from watching WBO super middleweight champion Arthur Abraham (36-4, 28 KO’s) get slaughtered tonight by the bigger, stronger, and more talented Robert Stieglitz (44-3, 25 KO’s) it’s that Abraham doesn’t belong fighting in the super middleweight division.

It was proven in the Super Six tournament where Abraham was beaten in three of the four fights he had, and it was proven once again tonight. Abraham simply doesn’t have the height or reach to compete in this weight class.

If he wants to fight Stieglitz again to get a payday, which is what we’ll likely see happen next, then you begrudge the guy one last payday, but he’s not going to go anywhere in this weight class.

Abraham needs to get on a stairmaster and work his way down to 160 to make a go of it in that fight class because that’s the only place he has any chance of success. He’s not going to beat the top super middleweight champions Andre Ward, Carl Froch, Mikkel Kessler and now Stieglitz.

Those guys are all too big and too skilled for him. Abraham also can’t move up to 175 because he’d be picked apart by the champions Chad Dawson, Beibut Shumenov, Nathan Cleverly and Bernard Hopkins. The best bet for Abraham is to work on his cardio and trim down to 160, and then look to go after WBO champion Peter Quillin or IBF champ Daniel Geale.

Those two appear to be the weak links in the middleweight division in terms of the champions. You can’t put Abraham in with middleweight champion Sergio Martinez or Gennady Golovkin because their boxing skills and power would be too much for him. They’re not any bigger than him, but their boxing skills are far superior and he’d never beat any of them. But by moving down to 160, Abraham would at least be taking away one of the main advantages that the super middleweights have over him in the size department.